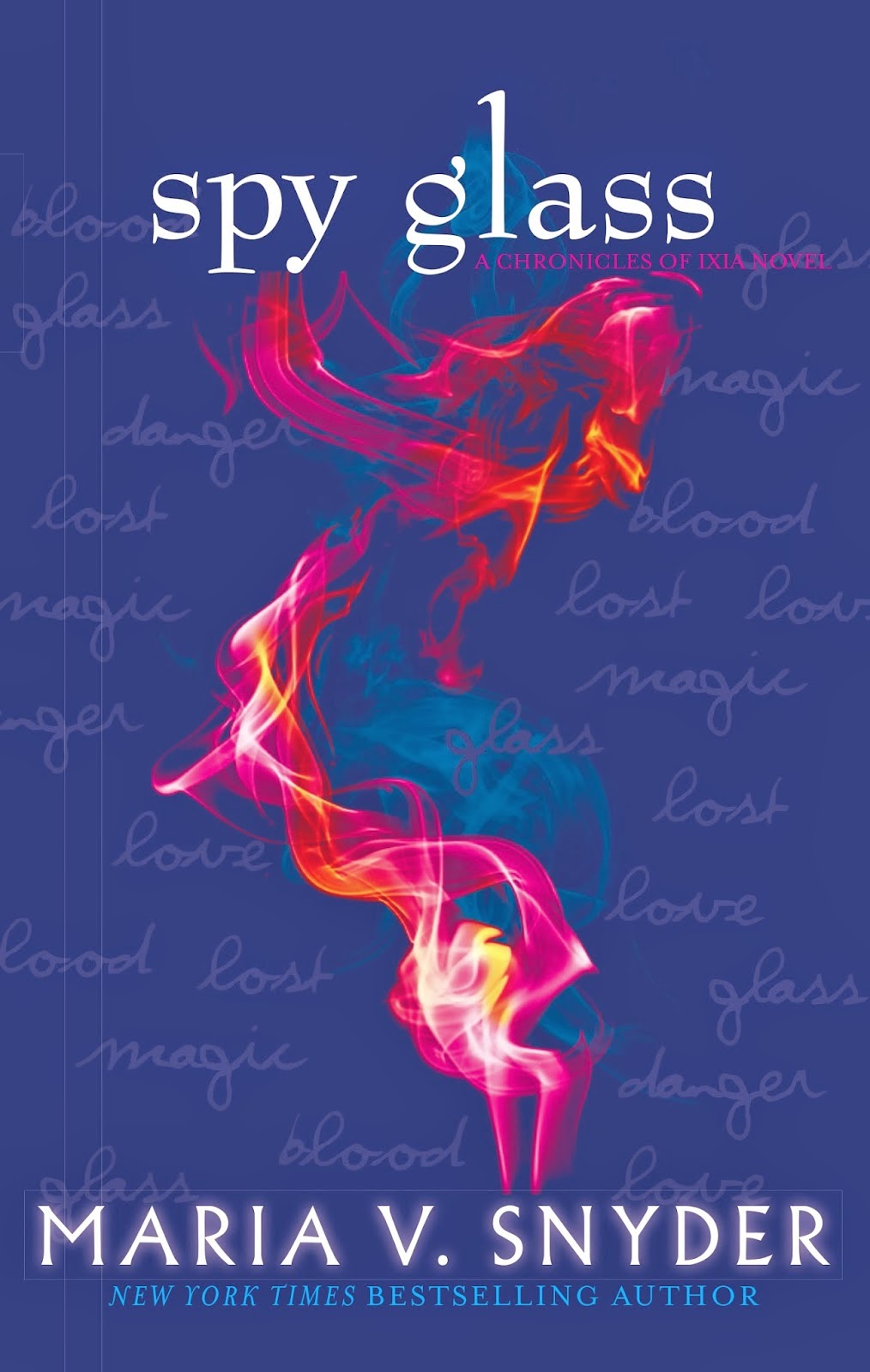 After siphoning her own blood magic, Opal Cowan has lost her powers and been separated from Kade and Ulrick, the two men who divide her heart. Now an outsider looking in, Opal spies through the glass on those with the powers she once had.

Until spying through the glass becomes her new power. Suddenly, the beautiful pieces she makes flash in the presence of magic. And then she discovers that some of her blood has been stolen - and that finding it may let her regain her powers for good.

Or learn if they're lost forever.

Review:
I'm a huge fan of Maria V. Snyder and I absolutely love her Chronicles of Ixia series. I think the first three books starring Yelena were probably my favourite but I've still been really enjoying the Glass books featuring Opal so I was looking forward to seeing how things played out for her in Spy Glass. I hate to say it but I think this is the first time I've been disappointed by one of this author's stories. Don't get me wrong, there were a lot of things to love about this book and I think that anyone who has started Opal's trilogy will have to read this book if only to see the end of her journey but there was one thing in particular that really annoyed me.

I'm going to talk about the positives first and I think the biggest was seeing how far Opal has come since the beginning of the series. She's been through so much and losing her magic at the end of the last book left her despondent and depressed. She feels more than a little sorry for herself at the beginning of this book but I can't blame her for that and I thought the author did a good job of showing how lost and alone Opal felt. I loved seeing her come to terms with what had happened though and deciding to make the best of things. We also get to see her spending a lot of time with Valek which was brilliant, Valek has always been a favourite of mine so I'm never going to complain about him getting more page time! There was plenty going on in this story, lots of action and a good does of mystery and magic that kept me turning the pages.

The main issue I had was to do with Devlin and is where I veer into spoiler territory so you might not want to continue reading this review if you haven't read the book yet! I've actually grown to like Devlin a little in the last couple of books which surprised me considering how we first met him, we've seen a lot of changes in his character and I do think that people can redeem themselves and turn their lives around. I could even get on board with Opal forgiving him to a certain extent and I would probably have been happy to see him find love in a future book once he'd done a bit more to prove that he's changed. What I really, really, REALLY couldn't believe was that Opal fell in love with him. That just didn't seem even slightly realistic and I'm just completely unhappy about their relationship.

This is the man that tortured her both physically and emotionally, not just once but on multiple occasions going on for days at a time. He broke her, he basically destroyed her and he made her betray her friends and the people she loved. Not only was he involved in her sister's murder but he also swapped souls with her boyfriend and then used her boyfriend's body to seduce her and torture her all over again! All this has happened in the space of the last two books and yet now I'm expected to believe that she can not just forgive him but fall head over heels in love? Nope, I don't believe it. In fact I HATE it. I'm disappointed in Opal and I'm angry with Maria V. Snyder for leaving Opal's series with such an unrealistic ending. Of course the one potential silver lining to Opal ending up with Devlin is that Kade is still single and I'm keeping my fingers crossed that we're going to get to see more of him in the next part of the series. I'd really like to see him meet someone and get his own happily ever after.

I may have been disappointed with Opal and Devlin's relationship but I've still really enjoyed the series as a whole and I would highly recommend all 6 of the current books in the Ixia series. I can't even begin to tell you how excited I was to learn that Maria V. Snyder was writing a new trilogy for the series and the first book, Shadow Study, is one of my most anticipated reads of 2015 - especially since it is going to be told from the points of view of three of my favourite characters in the series - Yelena, Valek and Janco!