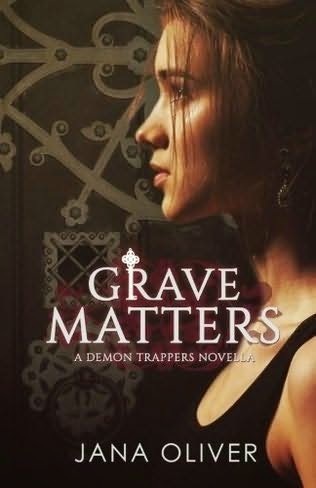 A legendary Demon Trapper, Riley Blackthorne frequently battles with Hell's minions. So when she travels to Scotland to meet up with her hunky boyfriend, and celebrate her eighteenth birthday, she's thrilled at the chance to leave Atlanta and it's troubles behind.

Denver Beck, who has been studying for months to become a Grand Master - a rare and highly dangerous job - is just as eager to see his girl. He's anticipating a romantic reunion, keen to take their relationship to the next level.

Riley's twisted history with Hell has garnered unwelcome interest by people willing to use her for their own purposes. Trouble is brewing in the land of the heather, the kind that will drive a wedge between her and Beck, and prove the ultimate test of their love . . . and their survival skills.

Review:
Riley and Beck have been apart for months while Beck is in Scotland studying to become a Grand Master but they're finally about to see each other again now that Riley is travelling to join him to celebrate her eighteenth birthday. Unfortunately their reunion doesn't go smoothly thanks to a shocking betrayal by one of the other demon trappers.

I absolutely loved this series so I was excited to get the chance to spend more time with Riley and Beck. It was also nice to see the couple outside of their usual hunting ground in Atlanta spending time together in Scotland. I'll admit that I didn't like seeing their relationship on rocky ground though, they've been through so much together that I had hoped they would be stronger than that. Thankfully they soon work through their differences and band together to stop their enemies though.

Grave Matters is a fairly short novella but I enjoyed every minute of it and my main complaint was just that I wanted more. The book also includes four illustrations by Mark Helwig of some of the different demons we've encountered throughout the series and two other demon trappers short stories written by Jana Oliver. You may have already read Retro Demonology which is a story about Riley's first solo attempt at trapping a demon and is already available as a free ebook but it's nice to now have this story available in print for the first time. The other story is called Personal Demons and it's another prequel to the series this time from Beck's point of view when he's hunting with Riley's father. Both of these short stories give us glimpses into younger versions of the characters we know and love from the series and were a great addition to the book.

This book isn't a good starting point for people who are new to the series but I'm sure Demon Trappers fans will love Grave Matters as much as I did. I'm going to keep my fingers crossed that Jana Oliver decides to revisit these characters again in the future but in the meantime I feel a series reread coming on.