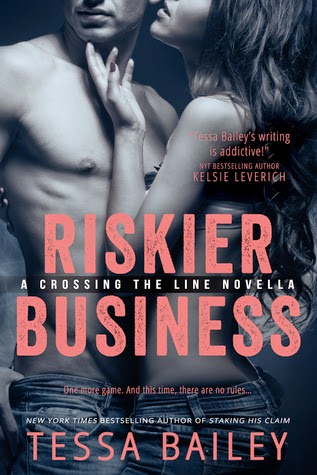 After a life of pool hustling and living on the wrong side of the law, Ruby Elliott is living on the straight and narrow with sexy-as-all-hell NYPD detective, Troy Bennett. Now the only trouble Ruby has with the law is the naughty kind, pinned against the wall by Troy's strict and spectacularly hard body. Obeying his every command. Both of them losing themselves in a lust that borders on obsession . . .

But then her father returns with an offer she can’t refuse: one last hustle in exchange for information. Information she’d die to have. As the pieces and the players of the game reveal themselves, Troy feels the fine edges of his control slipping—control he can’t channel without hurting Ruby. The stakes are high, and the risk higher. Because losing this final game could cost more than Ruby’s heart…it might cost her life.

Crossing the Line Series:
Riskier Business (Novella)
Risking it All
Up in Smoke (2015)

Review:
I really loved Troy and Ruby in His Risk to Take so I was excited we were going to get to see more of the couple in Riskier Business and thought this was a great way for Tessa Bailey to introduce us to her new spin off series. If you've already read the first book you'll know that Ruby was a pool hustler who had spent most of her life travelling around with her con artist father making money for him. When we met her she was trying to turn her life around and get back on the straight and narrow, her father was no longer around and she was trying to make an honest living when she started dating NYPD Detective Troy. Since the end of that book her relationship with Troy has gone from strength to strength, she has started her own business selling custom made pool cues and has managed to stay out of trouble. Unfortunately her father is now back on the scene and he's offering her the one thing she is desperate for - information about her mother - if she'll just play one last game for him.

Troy is reluctant to see Ruby pulled back into her father's world, which isn't too surprising considering what happened the last time, but he understands how much Ruby needs the information her father is offering her and he's willing to put himself on the line to help her get it. I absolutely loved Troy in the first book and I have to say that the chemistry between him and Ruby is still off the charts. He's a brilliant dirty talker and they love to play games in and out of the bedroom which is a lot of fun to read about. Unfortunately I had one major issue with him this time around and that was his jealousy over her friendship with Bowen. It was just irritating to begin with but then Troy goes and starts a physical fight with Bowen just because Ruby was having a conversation with him and I was completely turned off by that. A little jealousy in a relationship is one thing (I'm sure we've all felt that little green eyed monster at some point in our lives!) but it is NOT attractive when a guy gets physically violent just because you're talking to another man. I absolutely hated that and it made me question my previous opinion of Troy as one of the good guys. I would not accept those actions from anyone but the fact that he's a police officer made it even worse.

As much as I enjoyed the novella Troy's behaviour really did ruin this for me. The story is hot as hell, has a couple of interesting (although fairly predictable) twists but it lost points for that one major issue. It did remind me how much I love Bowen though and I have a feeling his story is going to be very interesting so I'm excited to continue the series with his story in Risking it All. I just hope he doesn't turn out to be a jackass like Troy.