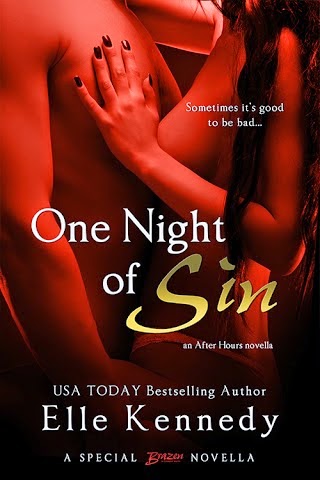 When it comes to sex, good girl Skyler Thompson always plays it safe, choosing stable and sedate over wild and thrilling. She doesn’t do one-night-stands, but one look at sinfully sexy Gage Holt and she’s willing to reconsider. He makes her want to be bad for once in her life, and she’s prepared to take what she wants.

Danger follows former MMA fighter Gage Holt like a shadow. Despite his successes as part owner of Sin, an exclusive nightclub in Boston, Gage can’t risk getting involved with a woman, especially one as sweet as Skyler. Still, he can’t resist a taste—and it’s so damn good he has to see her again.

As addicted as he is to her, Gage knows there’s no future for him and Skyler—not with his past lurking in the dark corners of an MMA cage. But Skylar’s tougher than she looks, and she’s ready to fight for her man.

Review:
Good girl Skyler isn't usually into one night stands but from the minute she spots Gage across a crowded nightclub she knows she's going to make an exception. Ex-MMA fighter turned club owner Gage has bad boy written all over him but Skyler is more than willing to explore her bad side with him and she's not going to take no for an answer. Gage knows he's the last thing someone like Skyler needs in her life but she's impossible to resist and he soon finds himself falling into a hot affair that could just turn out to be the best thing that ever happened to either of them.

One Night of Sin is the introduction to Elle Kennedy's After Hours series and she sure gets things off to a scorching hot start with Gage and Skyler. This is a fairly short novel and the attraction between the main couple is pretty instant but their chemistry practically steams up the pages so I didn't have a problem getting invested in their story. They're both great characters and although there are plenty of reasons for them not to be together I thought they were a fabulous couple. I loved that Gage brings out Skyler's more confident side, he makes her feel sexy and she isn't afraid to tell him exactly what she wants. Gage has no problem handling any of Skyler's requests and has plenty of his own ideas on how to spice things up in the bedroom.

We are also introduced to Gage's two business partners who all own an equal share in Sin nightclub and are the heroes of the next two stories. I have a feeling I'm going to love Reed and AJ just as much as Gage so I have high hopes for the rest of the series. If you're a fan of dirty talking heroes and are looking for an incredibly hot read then One Night of Sin is just what you need.