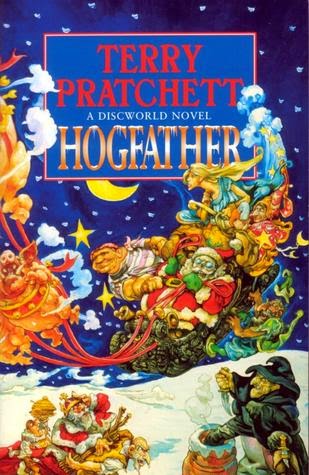 It's the night before Hogswatch.
And it's too quiet.

Where is the big jolly fat man? Why is Death creeping down chimneys and trying to say Ho Ho Ho? The darkest night of the year is getting a lot darker . . .

Susan the gothic governess has got to sort it out by morning, otherwise there won't be a morning. Ever again . . .

The 20th Discoworld novel is a festive feast of darkness and Death (but with jolly robins and tinsel too).

Review:
I have been a fan of Terry Pratchett's Discworld series for over 15 years now but I have to admit I've fallen a little behind with the more recent books. I've actually been promising myself for a few years now that I'll reread the series again from the beginning and catch up but for some unknown reason I never quite seem to get around to it. I decided it's time to bite the bullet but rather than read the books in order I used Christmas as an excuse to read Hogfather. This book is a perfect festive read, Death has always been one of my favourite characters in the series and seeing him dress up as the Hogfather (the Discworld equivalent of Father Christmas) is absolutely hilarious.

The Auditors are causing trouble again, they may be in charge of keeping the universe running smoothly but they think it would be much better if there were no humans around messing things up. This time they've decided to target the Hogfather and they've hired the assassin Mister Teatime (make sure you pronounce that correctly unless you want to upset him - it's Teh-ah-tim-eh NOT Tea-time!) to take him out of the equation. How exactly do you go about killing someone who can't die though? Teatime has a plan and Death is the only person who has noticed what is going on and is trying to put a stop to it. He's going to need help though and the best person for the job is obviously his granddaughter Susan who is used to dealing with all kinds of monsters using her trusty poker.

Hogfather is a hilarious read, obviously Death is the star of the show (he always is to me!) but we also get to visit with the wizards at the Unseen University, catch up with Susan, and spend time with the Death of Rats. With the Hogfather out of the equation (although Death is doing his best to fill in for him) the excess belief is causing all sorts of new creatures to pop up including the Verruca Gnome and the Oh God of Hangovers which makes for a lot of amusing moments. Death has always struggled to understand humans but this leads to some fantastic moments of insight. As with all of Terry Pratchett's stories we get an insightful look into the human psyche and you have to laugh at our way of thinking sometimes. Terry Pratchett obviously sees the world through a very interesting lens and I'd love to be able to take a trip inside his mind. This reread has left me more determined than ever to complete my Discworld catch up, so hopefully 2015 will be the year I finally make some serious headway.