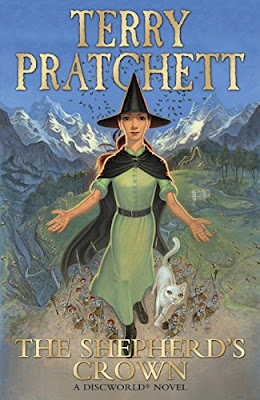 A shivering of the worlds

Deep in the Chalk, something is stirring.
The owls and the foxes can sense it,
and Tiffany Aching feels it in her boots.
An old enemy is gathering strength.

This is a time of endings and beginnings,
old friends and new, a blurring of edges and a
shifting of power. Now Tiffany stands between
the light and the dark, the good and the bad.

As the fairy horde prepares for invasion, Tiffany
must summon all the witches to stand with her.
To protect the land, Her land.

Review:
I don't think it's possible for me to write an objective review of The Shepherd's Crown. As someone who has been a fan of Terry Pratchett for over 20 years I think it's fairly obvious to say that I went into this final Discworld novel feeling very emotional. We all know that we lost Terry Pratchett too soon, he was truly one of the best British fantasy writers and his voice will be deeply missed. I'll always be grateful that we have so many of his books though and I'm very pleased that he was able to give us one final adventure before he left.

The Shepherd's Crown isn't quite as polished as his other stories, it states quite clearly in the afterword that Terry hadn't quite finished working his magic on this book. It definitely has a beginning, middle and end but there are parts you can tell have had more polishing than others and there were definitely a few threads that I felt sure Terry would have expanded upon if he'd had the time. While this hasn't quite been finished it's still a wonderful story and I do think it would have been his best Discworld book yet if he'd been able to complete it. It was certainly the most poignant book and it's the only one in the series that has made me sob my heart out as well as laugh out loud.

I expected to feel sad after reading The Shepherd's Crown but I wasn't quite expecting the story to be as heartbreaking as it was. It's hard to talk much about why without giving spoilers so I'll just leave it that there is a devastating loss of one of my favourite characters within the first couple of chapters. This particular character has a wonderful, poignant and heart wrenching conversation with Death and I couldn't help but think about Terry while reading it. Those two pages of this book were absolutely priceless to me and I think they probably give a little insight into how Terry was feeling about his own battle with illness. They certainly touched me deeply and I'm tearing up again now just thinking about it.

It was wonderful to revisit Tiffany Aching and the Nac Mac Feegles up on the Chalk too. Tiffany has come a long way since she started her witch training and I've loved taking that journey with her, she is wise and powerful but more than anything she loves her home and her people. She isn't afraid of hard work and she always puts everyone else above herself which can sometimes be her failing as much as it's one of her strengths. Now she is facing an old enemy and she has to realise that it's okay to ask for help, she will need all of the witches to come together if they are going to put a stop to the fae a final time. There are a lot of other familiar faces in this book and it was nice to get a last chance to catch up with them all. I'm still not quite ready to say goodbye to this world but like I saw someone post on Twitter we shouldn't be sad that this is the final Discworld book, just grateful that Terry Pratchett wrote so many in the first place.


Source: Received from publisher via NetGalley in exchange for an honest review (but I'd already pre-ordered the hardback!)