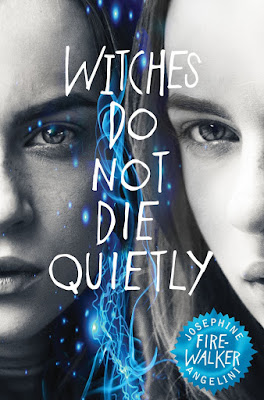 Lily Proctor has made it back to her own universe, and it's finally time for her and Rowan to be happy and relax. True, she almost died in the Pyre that fueled their escape, and they must hide her new magic for the safety of the world, but compared to fighting the monstrous Woven and leading armies in the alternate Salem, life is looking good.

Unfortunately, Lillian, ruthless ruler of the 13 Cities, is not willing to let Lily go that easily. Lily is the closest version of herself she's ever seen in all her worldwalking, and Lillian's running out of time. If she can't persuade Lily and Rowan to return to her world, she'll have to find a way to make them come back.

Review:
It's impossible to review Firewalker without including spoilers for previous books in the series so if you haven't read Trial by Fire yet then you need to look away now. I will say that I'm really enjoying this series though so it's definitely one I'd recommend checking out if you enjoy YA fantasy.

Trial by Fire was one of my favourite YA books last year so it's no surprise that I've been desperately waiting for the release of the sequel. I was actually so excited about Firewalker that I was kind of nervous to start reading it because I wasn't sure if it could live up to its predecessor and I have to admit that in some ways I was right - it didn't quite reach the highs of the first book but that doesn't mean it wasn't an excellent story in its own right and it still far surpasses a lot of other books out there.

The story picks up immediately from where we left off, Lily is badly burnt from the time she spent on the pyre but luckily she managed to get both herself and Rowan back to her own reality. She is relieved to have escaped from Lillian but she is now facing a whole new host of problems, not least of which is the FBI investigation into her vanishing act three months ago. It's not like she can explain where she's been all that time and she had no idea how much trouble her disappearance would have caused for the people left behind. Some have just been worried out of their minds, others have been living under suspicion of her murder but all of them have been suffering constant police surveillance and harassment. Lily didn't choose to leave and she came back as quickly as she could but she still has a lot of explaining to do. As if that wasn't bad enough she still has Lillian to deal with, she may have left Lillian's reality but Lillian isn't done with her yet and she is determined to pull her back into the war they started.

I have to admit I found the beginning of the story a little on the slow side, probably because I'm used to this series moving at such a fast pace usually. It was interesting to see Lily reconnect with her friends and family as well as trying to settle back into normal life but it wasn't as interesting as seeing her in Lillian's reality. I also had a few issues with the way Lily was keeping so many secrets from Rowan and the people who were supposed to be closest to her, I could kind of understand why she was holding back but at the same time I always think honesty is the best policy. Rowan started having real trust issues and he actually made me really mad a couple of times but I think a lot of the problems could have been avoided if Lily had been more honest with him in the first place. They were both in the wrong though and it's probably going to take a while for Rowan to work his way back into my good graces, I am still hoping he can manage it though so that's definitely something in his favour.

I actually think my favourite character in this book was Lillian, I found her fascinating in the first book but here we find out a lot more about the things she has been through and why she has made the choices she did. I'm never going to agree with some of her actions, let's face it she has done some pretty evil things, but I did find it much easier to understand how she ended up in that situation and it was interesting to see how Lily started to come to a similar conclusion. Although they are basically the same girl their life experiences have made them very different in a lot of ways but it does make you wonder if Lily wouldn't have done exactly the same things Lillian did if they had switched places at birth.

Anyway, when they returned to Lillian's reality the story really picks up the pace and I loved getting to explore more of that world. We get answers to some of the questions that we had at the end of the previous book but we also get hints that there is so much more going on than meets the eye and I'm dying to see how certain things are going to play out. Lily is in an impossible situation but she is so determined to make things right and find a different way to fix things and I have hope that she can come up with something. There are some beautiful moments in this story, shocking and heartbreaking twists, weird creatures that made me shudder in fear and brilliant friendships that made me smile. I'm definitely excited to see where Josephine Angelini takes things from here and I can't wait to continue reading the series.