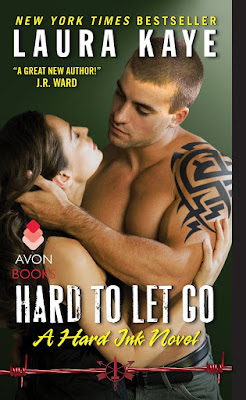 Beckett Murda hates to dwell on the past. But his investigation into the ambush that killed half his Special Forces team and ended his Army career gives him little choice. Just when his team learns how powerful their enemies are, hard-ass Beckett encounters his biggest complication yet - a seductive, feisty Katherine Rixey.

A tough, stubborn prosecutor, Kat visits her brothers' Hard Ink Tattoo shop following a bad break-up - and finds herself staring down the barrel of a stranger's gun. Beckett is hard-bodied and sexy as hell, but he's also the most infuriating man ever. Worse, Kat's brothers are at war with the criminals her office is investigating. When Kat joins the fight, she lands straight in Beckett's sights . . . and in his arms. Not to mention their enemies' crosshairs. Now Beckett and Kat must set aside their differences to work together, because the only thing sweeter than justice is finding love and never letting go.

Review:
The Hard Ink series just got better and better with every book and I think this final instalment was my favourite. Fans have been waiting a long time to find out if the guys would manage to figure out exactly who was behind the ambush that killed several of their team members and we've all been hoping to see them clear their names but they've had quite a fight on their hands and I wasn't quite sure if they'd all manage to survive the final battle. I'm not going to answer any of those questions for you so you'll just have to read the book for yourself to find out how it all ends but I will say that Hard to Let Go was an epic, action packed finale that was everything I'd hoped for and more.

Alongside the conclusion to the ongoing investigation and a chance to catch up with the previous couples this book gives us the chance to get to know Beckett, the gruff and closed off member of the team who has always held himself at a distance from the others. We know he's best friends with Marz and we know he blames himself for Marz's injuries but we haven't had a chance to get to know him that well before now so I wasn't too sure what to expect. There is so much more to Beckett than first meets the eye, his heartbreaking past brought tears to my eyes and I fell head over heels for the bossy, grumpy bastard.

Beckett and Kat are like oil and water and they can barely spend more than a minute in the same room without starting an argument but underneath the banter is a deep attraction that turns completely explosive when they finally give into it. Beckett has worked hard to keep himself closed off from others, thanks to his upbringing he's never really had a close connection to anyone but Kat makes him feel things he's never felt before and he doesn't know quite how to handle it. He isn't used to the emotions that she brings out in him and he's scared of hurting Kat if he gets too close. Kat is much more open and willing to act on the chemistry between them but she doesn't want to push Beckett into something he's not comfortable with so she's willing to take their relationship slowly. Here we have two strong and independent individuals who are wary of letting anyone close but who are both willing to fight for what they want. They make a fantastic couple and I loved spending time with them.

Hard to Let Go is a fantastic conclusion to the Hard Ink series, it ties up all the loose ends and gives readers answers to all our questions. It also sets things up nicely for the spin off Raven Riders MC series that starts next year with Ride Hard and I really hope that we're going to see some of the Hard Ink characters make the occasional appearance in the new series.