Review: Hard as You Can - Laura Kaye 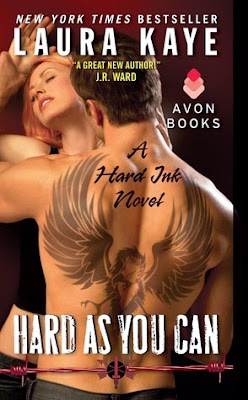 Ever since hard-bodied, drop-dead-charming Shane McCallan strolled into the dance club where Crystal Dean works, he’s shown a knack for getting beneath her defenses. For her little sister’s sake, Crystal can’t get too close. Until her job and Shane’s mission intersect, and he reveals talents that go deeper than she could have guessed.

Shane would never turn his back on a friend in need, especially a former Special Forces teammate running a dangerous, off-the-books operation. Nor can he walk away from Crystal. The gorgeous waitress is hiding secrets she doesn't want him to uncover. Too bad. He’s exactly the man she needs to protect her sister, her life, and her heart. All he has to do is convince her that when something feels this good, you hold on as hard as you can—and never let go.

Review:
I'm a huge fan of Laura Kaye and I loved the first book in her Hard Ink series so I have absolutely no excuse for why it's taken me so long to get around to picking up the second, Hard as You Can. Happily it's kind of paid off in my favour because the series is nearly complete so I can pretty much devour the remaining books without any long waits between instalments. This book picks up the story pretty much immediately after the end of Hard as It Gets, the group have started to uncover just how badly their team was betrayed by their commanding officer but they're still trying to tie all the pieces together and find evidence to prove their own innocence.

Becca's brother, Charlie, was kidnapped in the previous book, he risked his life to get them information and now the team are determined to bring him safely home. Shane meets Crystal when he's undercover trying to find Charlie, she helps him get away safely and now he feels a certain responsibility towards her. Crystal has access to information that the team desperately need but just being in contact with Shane puts her in danger and all she wants is to keep her head down and protect her younger sister. Crystal was put in an impossible situation through no fault of her own and she's been fighting just to hold her head above water for several years, she has been desperately searching for a way out and she knows Shane may just hold the key to her escape but is she brave enough to take that first step?

We met all the guys in the previous book and I was definitely looking forward to reading Shane's story, he's one sexy alpha and he knows how to use his southern charm to get exactly what he wants. Shane is incredibly protective of anyone he cares about and he hates the situation that Crystal is in. What he wants more than anything is to take her to safety but they can't risk removing her until they have the information they need. It isn't easy leaving her in such a dangerous position but there is much more than one life at stake and the team are unable to walk away without trying to put a stop to the gang and their human trafficking operation. Crystal is a fabulous character, she is stuck in a living hell but she has managed to protect her sister Jenna from the worst of it. Jenna has no idea how much Crystal has sacrificed to keep her safe and I had to admire Crystal for everything she has done. She's a fighter, she has never given up on the chance of escape even though it has taken years of planning and she's still got a long way to go. She doesn't find it easy to trust Shane, which is completely understandable, but she knows that he is offering the best chance she's going to have of getting Jenna somewhere safe.

I loved Hard as You Can, it's got the perfect ratio of action and suspense to romance, we get to spend more time with the whole team and catch up with the previous couple while also getting to know some newbies and enjoying the relationship that develops between Shane and Crystal. I can't wait to read the rest of the series and see if the team manages to clear their names and what they decide to do with their lives at the end of it.