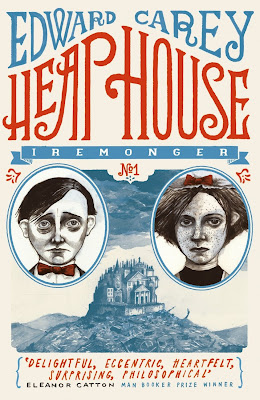 Clod is an Iremonger. He lives in the Heaps, a vast sea of lost and discarded items collected from all over London. At the centre is Heap House, a puzzle of houses, castles, homes and mysteries reclaimed from the city and built into a living maze of staircases and scurrying rats.

The Iremongers are a mean and cruel family, robust and hardworking, but Clod has an illness. He can hear the objects whispering. His birth object, a universal bath plug, says ‘James Henry’, Cousin Tummis’s tap is squeaking ‘Hilary Evelyn Ward-Jackson’ and something in the attic is shouting ‘Robert Burrington‘ and it sounds angry.

A storm is brewing over Heap House. The Iremongers are growing restless and the whispers are getting louder. When Clod meets Lucy Pennant, a girl newly arrived from the city, everything changes. The secrets that bind Heap House together begin to unravel to reveal a dark truth that threatens to destroy Clod’s world.

Review:
Every child born to the Iremonger family is given a birth object that they must carry with them their entire lives, for some this isn't a problem - Clod can easily fit a bath plug in his pocket - but for others it makes life difficult, you can't exactly carry around a mantelpiece so Clod's grandmother has lived her whole life stuck in one room. Nobody knows what would happen if they lost their birth object but they know it won't be good and they get the chance to see why first hand when one of Clod's aunts misplaces her door handle.

Heap House is a very quirky and unusual read, it's clear that Edward Carey has a cracking imagination and I was immediately caught up in the story and wanting to learn more about the Iremonger family. I loved how all of the characters had unusual names and it was interesting to discover how their birth objects fitted their personalities. I was also very curious about this strange and twisted version of London, a London that has become a giant rubbish heap. The Heap is almost a character in it's own right, it's constantly changing and is an incredibly dangerous place to be. The Iremonger family live in a huge house in the middle of the Heap, their house is made up of bits and pieces of all different kinds of buildings and it's the kind of place you could spend weeks exploring and still never uncover all of it's secrets. The Iremongers scavenge through the Heap looking for useful items which they basically recycle and find new uses for. Their family is very insular, they don't allow strangers to visit their home, they always marry within the family (there are a huge amount of second, third and fourth cousins to choose from) and even the servants must have some Iremonger blood in them.

Clod has spent his whole life inside Heap House, he quite likes the idea of visiting London but he is unable to travel through the Heap because of his ability. Clod hears things, inanimate objects all seem to call out to him telling him their names, he is the only member of his family who hears this but it's an ability he has had for his entire life and it means he finds things very overwhelming if he is surrounded by too many objects. Lucy is an orphan who has only just arrived at Heap House, she is a distant relative and has been brought home to join the ranks of servants who look after the house. Upper Iremongers aren't supposed to mix with the servants but when Clod and Lucy meet they find themselves embroiled in a set of strange events and life at Heap House will never quite be the same again.

Heap House is a really difficult book to review because it's such an unusual tale, I think it's the kind of story that you'll either fall head over heels in love with or unfortunately, like me, you could end up struggling with it. I loved how unusual the story was but I just felt like it dragged a bit and I spent a lot of time confused and not at all sure where things were going. Even after reading just over 400 pages I'm still bemused about what was actually going on and I'm not sure if there really was a point to it all. It's quirky, I loved the gothic feel to it and the wonderful illustrations but I never managed to connect with any of the characters. The story is narrated by both Clod and Lucy, with occasional short sections from other important characters, but I never really felt like I got to know much about either of them. The hint of romance felt rushed and unbelievable and I feel kind of indifferent about what will happen to them in the rest of the trilogy. That's not to say this is a bad book, I think it just wasn't to my taste. If you're looking for something completely different then it wouldn't hurt to give this a try though because there really is a lot to like about it.