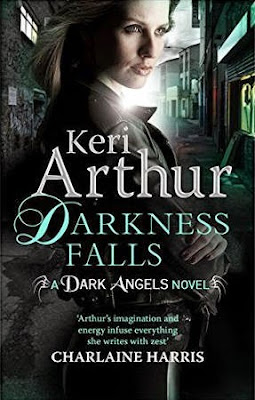 The bestselling Dark Angels series builds to a breathtaking conclusion as half-werewolf, half-aedh Risa Jones treads a knife's edge between the salvation of the human race and its total annihilation.

The search for the last key to the gates of hell has begun. Risa Jones is in more danger than ever - and one misstep could prove ruinous. It's only a matter of time before Madeleine Hunter, the dangerous head of the vampire council, begins her plan for complete domination. For Risa, that comes with an alarming ultimatum: hand over the last key to Hunter or, one by one, her loved ones will die. Now it's a race against time for Risa to save those she loves and to stop Hunter's apocalyptic plans to open the gates of hell . . .

Review:
Once again it's been time to say goodbye to a much loved series so I put off reading Darkness Falls for a while even though I was desperate to find out how everything was resolved. One of the things I really love about Keri Arthur is that she never drags her series out just because they're popular, in fact she often ends them before I'm really ready for it. She obviously has her stories planned well in advance and as much as I'm sad to say goodbye to this world, I would rather see things end on a high note than be dragged out forever like some series I won't mention. The Dark Angel series definitely went out with a bang and I have really loved every single book.

I'm not going to say much about what happens in this book but I will tell you that there is plenty of action and we get to see a lot of loose ends tied together. We discover what the future holds for Risa and Azriel, we get a glimpse at all our favourite characters from the previous Riley Jenson series, we finally see Madeleine Hunter make her move to take over the vampire council and we see Risa locate the final key. Once again Risa is working to a very tight schedule, she is doing her best to protect everyone she cares about but with so many enemies coming at her from all different directions it isn't going to be easy to fight them all.

Risa has really come into her own since the beginning of this series, she was already pretty powerful but she's learned a lot about her aedh side and picked up some interesting new abilities thanks to her bond with Azriel. She isn't perfect and she's made mistakes in the past by trusting the wrong people but she has the courage to stand up for herself and others and she always does what she thinks is right. I've loved the relationship between her and Azriel, it hasn't been easy for them but I've been rooting for a happy ending for them for a long time now. You're going to have to read the book for yourselves to see if they get one but I think you'll be happy with the overall outcome of the series.

I'm sad that it's over but I've enjoyed the journey and I'm already looking forward to rereading these books at some point in the future.