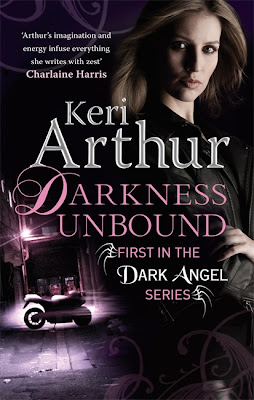 Born from a lab-enhanced clone mother and an Aedh father, Risa Jones can not only talk to the souls of the dying and the dead, but she can see reapers and walk the grey fields that divide this world from the next. They are skills she rarely uses, however. But when her mother asks her to help the parents of a little girl locked in a coma, she reluctantly agrees. What she discovers terrifies her: someone has ripped the girl’s soul from her flesh.

As it turns out, a creature consuming the souls of the innocent - and not so innocent - is the least of her problems. Because someone wants to rip open the gates that divide hell from earth, and Risa is a key component in their plans. And the only person standing between her and disaster is a reaper who isn't exactly on her side.

Review:
Darkness Unbound is the first book in Keri Arthur's Dark Angels series. It is a spin off from the Riley Jenson series staring Dia's daughter Risa and does have cameo appearances from Riley and the rest of our favourite characters. I do think that it would be possible to read this new series separately but be aware that it will give you spoilers for how the Riley books ended if you decide to pick them up at a later date. I'm a massive fan of Keri Arthur's and would highly recommend both the Riley series and Darkness Unbound.

If you've read the Riley series then you'll remember Risa as a young child, Darkness Unbound begins her story about 25 years later. Risa is now 28 years old and runs a restaurant with her two best friends Ilianna and Tao. As a half-werewolf and half-Aedh she has some unusual abilities that have put her in the Directorate's radar, they want her to become a Guardian like her aunt Riley but so far she has refused. All she really wants is a quiet life, she may be able to see reapers and visit the grey lands (the spirit world) but she only does so reluctantly and usually when she feels compelled to help someone.

It did feel a bit strange at first to be reading about Risa as an adult but it didn't take me too long to get used to that. I loved getting a glimpse of how things have turned out for Riley, Quinn, Rhoan and Liander but I'm glad that they weren't the main focus of the story. I hope we see more of them as the series continues but I don't want them to overtake Risa. We are introduced to an interesting new cast of characters and I'm looking forward to getting to know them all better. Risa and her friends Ilianna (a mare who is also a powerful witch) and Tao (a werewolf with the ability to control fire) are a tight group and have each others backs. It's always nice to read about supportive friendships and this was no exception. Risa is a strong woman on her own but surrounded by her friends and family she can take on the world. In fact she will do anything to protect those she loves but I like the fact that she isn't too proud to ask for help when she needs it.

Risa's current love interest is another Aedh called Lucien, now he may be hot but I have to admit that I have my suspicions about him. There is nothing concrete but I just don't trust him and am concerned that he doesn't actually have Risa's best interests at heart. I'm much more interested in reaper Azriel - who can resist a half naked, sword wielding warrior? - and after watching the attraction between him and Risa I have high hopes for a future romance between them.

The plot is just as strong as any of Keri Arthur's other books although there is slightly more focus on introducing the new characters as this is the first of a new series. I'm fascinated with Risa's abilities and have a feeling we've only touched the surface of what she can do. I'm also very curious to find out more about her father and to see how Risa copes with the aftermath of a very shocking event at the end of the first book. This was a great start to a new series and I can't wait to see what happens next.