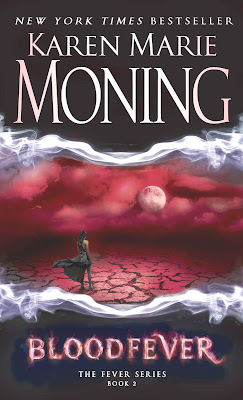 I used to be your average, everyday girl, but all that changed one night in Dublin when I saw my first Fae and got dragged into a world of deadly immortals and ancient secrets . . .

In her fight to stay alive, MacKayla must find the Sinsar Dubh - a million-year-old book of the blackest magic imaginable, which holds the key to power over the worlds of both the Fae and Man. Pursued by assassins, surrounded by mysterious figures she knows she can't trust, Mac finds herself torn between two deadly and powerful men: V'lane, the immortal Fae Prince, and Jericho Barrons, a man as irresistible as he is dangerous.

For centuries the shadowy realm of the Fae has coexisted with that of humans. Now the walls between the two are coming down, and Mac is the only one thing that stands between them.

Review:
Bloodfever is the second book in Karen Marie Moning's Fever series starring Sidhe-Seer MacKayla Lane. The story picks up right after the ending of Darkfever - Mac is staying with Barrons as she recovers from her injuries and has agreed to help him search for the Sinsar Dubh (an ancient book that is supposed to contain Fae secrets). She now knows who was behind her sister's murder and is determined to track them down and make them pay. With the number of Unseelie Fae on the streets of Dublin increasing daily and the interest she has attracted from the Seelie prince V'lane it isn't going to be easy for Mac to keep her head down and stay out of trouble. Especially when an old enemy comes out of the woodwork looking to get revenge against her. Add in the Sidhe-Seer organisation that want her to join them and things are about to get complicated.

I'm making it my mission this year to finally finish reading all those series that I started, bought the whole series after enjoying the first book and then never got around to finishing and the Fever series is first on my list. I really enjoyed the first book when I read it last year and I have no idea why I never got around to finishing it, perhaps afterwards I'll finally get around to trying Karen Marie Moning's Highlander series too!

Mac isn't your typical urban fantasy heroine, she is much more girlie than most - she loves to dress up in fun flirty colours and was quite a pool bunny before she left her home in Georgia to track down her sister's killer in Dublin. Having said that she is also smart and stubborn and she is learning to kick ass when she needs to. She may not be the strongest character physically but she has determination and she is able to stand on her own two feet emotionally. I love the fact that Mac still has that flirty side to her but it was nice to see that she has started to grow up too.

My favourite thing about this series so far has to be Mac's developing relationship with Barrons. I love the banter between them, every single scene with the two of them in it has me on the edge of my seat waiting to see how things play out. They have such a love / hate relationship right now but I know exactly which way I want to see things go as the series continues. Barrons is a complete mystery man and I'm dying to start uncovering some of his secrets. He can be evasive and often comes across as uncaring and emotionless but every so often you get a glimpse of something more to him and those instances have me hooked. Barrons is definitely the kind of guy that leaves you wanting more. The chemistry between him and Mac is intense and I can't wait to see that spark finally ignite -- I have a feeling that when it does the outcome is going to be an inferno!

I'm still curious about the death-by-sex fae prince V'lane too, I wouldn't trust him as far as I can throw him but I don't think he is all bad. I have a feeling that he could end up being someone that Mac has to rely on in the future and it will be interesting to see if he ends up betraying her or if he'll actually be someone she can trust to support her. Bloodfever had a darker story line than Darkfever and I was actually shocked at the things that Mac has to go through so early in the series. It just goes to prove that she is a lot stronger than most people give her credit for though and it made me look at her with a new respect too. These are the kind of books that you want to make sure you have time to devour in one sitting, I found it impossible to put down once I'd started and I'm itching to pick up the next book. Luckily I have the rest of the series sitting on my shelves and I'm determined that it won't be another year before I pick up the next one!