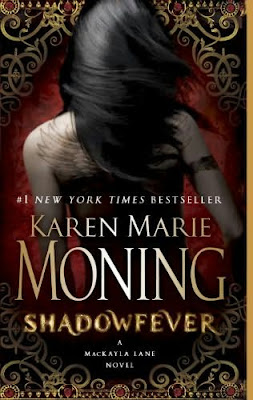 MacKayla Lane was just a child when she and her sister, Alina, were given up for adoption and banished from Ireland forever.

Twenty years later, Alina is dead and Mac has returned to the country that expelled them to hunt her sister's murderer. But after discovering that she descends from a bloodline both gifted and cursed, Mac is plunged into a secret history: an ancient conflict among us for thousands of years.

What follows is a shocking chain of events with devastating consequences, and now Mac struggles to cope with grief while continuing her mission to acquire and control the Sinsar Dubh - a book of dark, forbidden magic scribed by the mythical Unseelie King, containing the power to create and destroy worlds.

In an epic battle between humans and Fae, the hunter becomes the hunted when the Sinsar Dubh turns on Mac and begins mowing a deadly path through those she loves.

Who can she turn to? Who can she trust? Who is the woman haunting her dreams? More important, who is Mac herself and what is the destiny she glimpses in the black and crimson designs of an ancient tarot card?

Review:
Please bear in mind that Shadowfever is the fifth (and currently the last although I know Karen Marie Moning plans to come back to this world after writing the spin off trilogy about Dani) book in the Fever series. I have really enjoyed all of these books and would highly recommend them but you need to read the books in order starting with Darkfever, if you're not up to date with the series then you should stop reading this review now in case of spoilers.

Mac's story continues immediately after events in Dreamfever but I don't really want to go into details about the plot because I'd hate to spoil it for anyone. I will say it is packed with action, full of shocking twists and turns and will answer nearly all of the questions that we've had throughout the series. We finally find out what Barrons is and what he needs the book for, Mac finds out who was behind her sister's murder and the truth about her family and we discover how the Sinsar Dubh managed to escape from the Sidhe Seers in the first place. There really is so much going on that although this is a long book (671 pages in my paperback version) I still whizzed through it and didn't want to put it down for a second.

It's been a while since I discovered a series where each of the books are so consistently good and I thought Shadowfever was a fantastic ending to Mac's journey. I loved the way she has changed so much throughout the series, everything she has been through in such a short period of time has impacted dramatically on her and the changes continued in this book. Her grief makes her even harder than she was before, she will do whatever it takes to get her hands on the book so she can use it for her own agenda. It has been fun watching her go from a pink wearing, beach loving party girl to a fierce warrior in black leather and full of attitude. I'm pleased that she hasn't completely lost her inner girlie side though.

I absolutely love the way things ended between Mac and Barrons, I have been a massive Barrons fan since the first book and their relationship has been an intense (if sometimes frustrating) ride! As much as I'm looking forward to the spin off series about Dani I am really pleased that the author is planning on writing more books about Mac & Barrons in the future. I'm not ready to say goodbye to the couple yet so as much as their story has reached a satisfying conclusion for now I just want more!

Karen Marie Moning has definitely been added to my list of auto-buy authors, I can't wait to read Iced but I'm also very pleased to have her Highlander books to work my way through in the meantime. I've already ordered a copy of Beyond the Highland Mist!