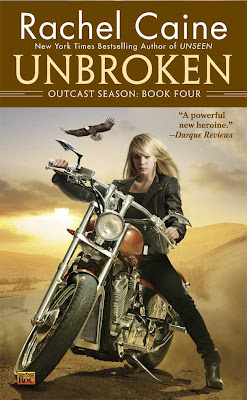 For millennia, Cassiel was a powerful Djinn - until she was exiled to live among mortals. Now the threat of an apocalypse looms, and Cassiel is in danger of losing everything she has come to hold dear....

As the world begins to fall apart around her, Cassiel finds herself fighting those she once called her own: the Djinn. With Warden Luis Rocha and the rescued child Ibby by her side, Cassiel struggles to find a way to protect those who are in her charge and come to terms with the leadership role she never asked for.

Cassiel is opposed by Pearl - a powerful Djinn bent on raising an army of kidnapped Warden children to bring about nothing less than the end of the world. It will take everything Cassiel has to stop the Djinn from starting a war that will wipe all of humanity from the face of the earth. She knows that this might not be a battle she can survive, but protecting those she loves is worth any cost....

Outcast Season Series:
(This is a spin off from The Weather Warden Series)
Undone
Unknown
Unseen
Unbroken

Review:
Unbroken is the fourth and final book in the Outcast Season series and in the Weather Warden time line runs alongside the last book Total Eclipse. Rachel Caine's Weather Warden and Outcast books are some of my favourite urban fantasy stories and they are ones I would highly recommend but you should really read the books in order, starting with the Weather Warden series and then following with these books. You could read the Outcast series without having read the other one first but you'd be missing out on a lot of world building and some fab characters so I wouldn't recommend it.

I didn't actually realise that Unbroken was the last book about Cassiel until I started reading it and I have to admit that I'm really sad to reach the end of the journey. The world Rachel Caine has created with both Djinn and Wardens who have the power to control the elements has been a fascinating one to spend time in and I'll miss it now it's over. Still, if you're going to come to the end of a series you want it to end on a high and that is certainly the case here.

I have really enjoyed watching Cassiel change throughout the series. As one of the old Djinn she started off as very cold and unfeeling but the longer she has spent living as a human the more she has started to show her emotions. Having said that she hasn't completely lost her original way of looking at things and she isn't afraid to make difficult decisions if it means achieving her goals. I do love the way she has come to care for Luis and Ibby though and the way they have bonded and become a little family in their own right has been really sweet. Ibby has been through a terrible ordeal and things get even harder for her in this instalment - it was quite heartbreaking to see some of the things she goes through here.

Anyone who has read Total Eclipse will recognise part of the story and I found it really interesting to see the same events but from the opposite angle. That is only a small part though because for the majority of the book Cassiel's journey is in a very different direction to Jo's in Total Eclipse. I loved getting to see more of the Djinn, spend some time with David, Jo & Lewis and of course find out if Cassiel would be able to stop Pearl. The stakes have really been raised in the last few books of both series and I was on the edge of my seat waiting to see how things would play out. I would highly recommend both of these series and I'm sure I'll be re-reading them myself at some point in the future.