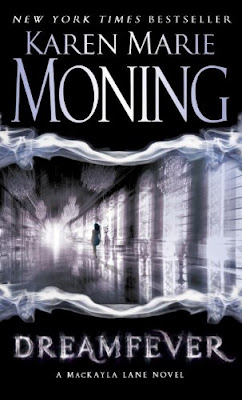 They may have stolen my past, but I'll never let them have my future.

When the walls between Man and Fae come crashing down, freeing the insatiable, immortal Unseelie from their icy prison, MacKayla Lane is caught in a deadly trap. Captured by the Fae Lord Master, she is left with no memory of who or what she is: the only sidhe-seer alive who can track the Sinsar Dubh, a book of arcane black magic that holds the key to controlling both worlds.

Clawing her way back from oblivion is only the first step Mac must take down a perilous path, from the battle-filled streets of Dublin to the treacherous politics of an ancient, secret sect, through the tangled lies of men who claim to be her allies into the illusory world of the Fae themselves, where nothing is as it seems - and Mac is forced to face a soul-shattering truth.

Who do you trust when you can't even trust yourself?

Review:
Bloodfever is the fourth book in Karen Marie Moning's Fever series starring Sidhe-Seer MacKayla Lane so this review may contain spoilers for the previous books. The story picks up right after the ending of Faefever - the walls between the Fae and mortal realms have failed allowing the unseelie prisoners to escape and leaving Dublin under attack. Worse still Mac has been turned pri-ya by the unseelie princes and has become completely obsessed with her physical needs not even able to remember her own name. Can she come back from the brink of madness to help put a stop to the Lord Master's plans?

I've been really enjoying the Fever series but I have to say I think Dreamfever was my favourite instalment yet. I'm so relieved that I already have my copy of Shadowfever though because the cliffhanger would probably have killed me if I had to wait a year for it! Poor Mac has been through so much since she arrived in Dublin and that pretty, sun loving, pink wearing & flirty young girl is no more - she has had to toughen up to cope with everything that life has thrown at her and she is now all black leather and sharp edges. You have to admire her just for surviving - I don't think many people would have the strength of character to go through everything she has and come out the other side with her sanity intact (well almost anyway lol).

It is so hard for her to know who to trust, she is afraid to even trust her own instincts any more. She feels that both Barrons and V'lane let her down by not coming to her rescue before the princes captured her and she is determined never to allow herself to rely on anyone again. I can completely understand why she feels like that but sometimes I do find myself wishing she would let people help her a bit more. I'm still desperate to find out more about Barrons - what the heck is he? - and I loved the way things played out between him and Mac in this book (particularly at the beginning of the story - I feel like I've waited FOREVER for that!).

It's been really interesting watching how things have played out with the Sidhe-Seers - I really can't stand Rowena and there were times I wanted to reach into the book and slap her but to give the wily old bird her dues she certainly knows how to play the political game and get people on her side! It was great to see the friendship between Mac and Dani grow though and I enjoyed seeing things from Dani's point of view for a few chapters at the beginning - that has made me excited about the spin off series staring her that comes out later this year (starting with Iced). I'm hoping we get to see Mac and Dani team up more in Shadowfever because I think they work so well together.

The story has been getting darker and darker with every instalment which makes for very intense reading. It's going to be very interesting to see how Karen Marie Moning finishes this part of the series - I'm really hoping that Mac gets to have some kind of happiness by the end because I think she's earned at least a bit of a break!