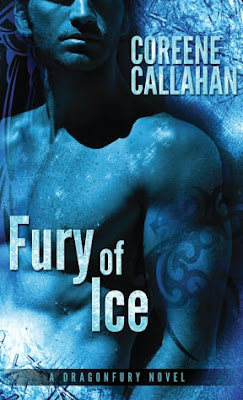 Homicide detective Angela Keen thrives on the city’s rough streets. But when she becomes the prize of all prizes in the dragon-shifter world due to her “high-energy” status, she gets more than she bargained for. Kidnapped by Lothair of the Razorback clan, Angela barely survives captivity before managing to escape. Hurt and alone with nowhere to hide, she faces certain death when Lothair uses the trace energy she leaves in her wake to hunt her down. But before he can reach her, a mystery dragon-shifter intervenes and saves Angela’s life.

Now a guest of the Nightfury clan, Angela regains her strength as her rescuer, Rikar, the last living frost dragon, gradually breaks down her mistrust. Surrendering to her desire for Rikar, but still uncertain of her feelings, Angela goes against his wishes and agrees to be used as bait to lure Lothair into the open. As the battle commences, the true struggle comes from within: Will Angela return home to the life she loves, or forsake it all to be with Rikar?

Review:
From the minute I found out about Coreene Callahan's new paranormal romance series about dragon shifters I knew I had to read it. I've always had a soft spot for dragons but you don't seem to find many of them in this genre - not enough for me anyway! I have to admit I was a little disappointed with the first book Fury of Fire, I'm not going to go into too much detail because I did that in my previous review but there were things about the mythology that didn't make sense and I found it difficult to get on board with a relationship where the hero knew that his actions would kill the heroine. However, despite the problems I had with the first book I still felt that the series had a lot of potential so I couldn't resist requesting a copy of the second book Fury of Ice when it came up on the last Amazon Vine list. I'm very pleased I gave the series a second chance because this was a much stronger instalment and I'm now really excited to see where things go next in Fury of Seduction.

Detective Angela Keen was a side character in the first book as she investigated the disappearance of Myst. At the end of the last book we saw her captured by the Nightfury's enemy the Razorbacks and she went through quite an ordeal before she escaped. I have to say I can really get behind a heroine who manages to rescue herself rather than sit around waiting for the hero to come and save her. Angela is tough, she has trained hard to be good at her job and she refuses to sit back and be a victim. After her escape she is emotionally raw but she is determined to get her chance at revenge against the dragons who took her. She knows she can't manage it on her own though so asks Rikar for help.

Rikar is Bastian's second in command and the loss of Angela to the razorbacks raised all of his protective instincts. He is determined to keep her safe and he is so sweet in the way he is willing to work at earning her trust and not push her into anything she isn't ready for. He obviously cares for her deeply and really struggles with the instincts to keep her safely away from the enemy and the need to give her whatever she wants by letting her get in on the revenge. I felt their romance was much more believable than the one between Bastian and Myst, both Rikar and Angela were much more likeable and it was easy to route for them as a couple. I did feel that Angela got over her ordeal a little too quickly but that was a fairly minor thing because the author did try to show that she wanted to move on and you could feel the connection between them.

There are still a few too many similarities with J.R. Ward's Black Dagger Brotherhood books and Lara Adrian's Midnight Breed series but I felt that there were less this time and I'm hoping the series moves even further away from that as it continues. I had some major problems with the motives of the bad guys in the first book but I'm pleased to say that was resolved in this book, I'm not sure if I misunderstood things before or if it just hadn't been explained very well but either way things now make much more sense which I was really pleased about. I really enjoyed getting to know more about some of the other dragons in the Nightfury clan - Mac and Forge both particularly caught my attention but I also have a feeling that I'll really like Wick so I'm hoping they all get their own book in the future. I'm pretty sure that it will be Mac's turn next and I'm definitely looking forward to reading his story.

I would happily recommend this book even to people who weren't completely sold on the first story. This instalment was much stronger and I think the series will just get better and better. If you like the BDB and MB series or any other book with a strong group of male warriors who put their lives on the line to protect others then it would be worth giving these books a try. The banter between the dragons is fun, I like the fact that the women still have a part to play in the story and I love the fact that there are so many different dragon types and they all have different skills. I'm looking forward to seeing what happens next.