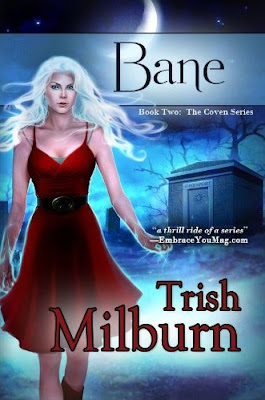 To protect those she loves from herself, Jax will leave them all behind. She’ll risk everything in a desperate search for answers.

Jax Pherson fled the darkest of covens and from her own father’s evil. For a brief moment, her courage was rewarded. She found everything she’d ever wanted. A normal life. An amazing boyfriend. An envy-worthy best friend.

But her past put them all in danger, forcing a confrontation with the dark covens. In a life-and-death battle to save those she loved from the covens, Jax gained staggering power. Power so intense, so dangerous, she fears the darkness that now dwells inside her like a living thing.

If she can’t control the power, she may yet become as evil as the witches she conquered.

With her cousin Egan, Jax leaves all she’s built and heads for the one place that might hold the answers she desperately needs to hold back the darkness—Salem, Massachusetts. Her research unearths a shocking discovery: the Bane, a secret group of witches dedicated to thwarting the covens.

Jax desperately needs their help in her fight against the covens, but finding the Bane is easier said than done and takes all her skills and courage. As Jax gets closer, her dark powers began rise and control her actions. If she succumbs to the darkness, Jax may have as much to fear from the Bane as the evil covens and the determined hunter on her trail.

Review:
Bane is the second book in Trish Milburn's new Coven trilogy so this review will contain spoilers for the first book. I don't think you'd be able to read this story as a stand alone as you'd be missing too much background information so I wouldn't recommend reading further if you haven't read White Witch.

Jax may have managed to win the battle against her coven at the end of the last book but she knows that won't be the last they hear of them. In fact she is convinced that they will join with Egan's coven and be back for more. In search of answers about Jax's new found powers they have returned to where the covens were first created hundreds of years ago - Salem. Horrified that their friends Keller and Tori were injured because of them Jax and Egan have left them in Bakers Gap to keep them out of danger. Does Salem hold the answers that they need to beat the covens and can they find the information in time?

I enjoyed the first book in this series and was curious to see what would happen next to Jax and her friends. I had high hopes for the second book but unfortunately it felt more like a filler book than a full length story in it's own right. I didn't feel like enough happened to really move the story line forward and what was there could have been reduced in length and added to the next book (or the previous one). The first half of the book was very slow moving and I missed the banter between Jax, Egan, Keller and Tori which was one of the things I loved most in White Witch. I was pleased when Keller and Tori arrived back on the scene but it still didn't quite regain the feel of the first book. The action did pick up in the second half but I was expecting another big showdown with the covens and was disappointed that they didn't make an appearance. It also felt like the book ended in the middle of the scene - there are cliffhangers that have you desperate to read the next instalment and there are ones that leave you thinking your copy of the story has some pages missing. Unfortunately this was the latter.

We are introduced to some interesting new characters and I enjoyed finding out about the different kinds of witches. I hope we get to know them better in the next book because at the moment they don't feel very fleshed out. I didn't particularly like the addition of the obligatory love triangle though. That's a trope that I'm getting really bored with as it is so overdone in paranormal YA fiction. Occasionally the triangle is done well enough that I enjoy it but this time it felt like it was just thrown in for the sake of it. I didn't feel any connection with the new boy in Jax's life and it didn't really seem like she did either. Scenes between the two of them just made me roll my eyes.

I am still interested enough in the world building that I will probably pick up the third book when it comes out later this year though. I'm very curious about Jax's new abilities and the darkness that is inside her and will be interested to see how she deals with that. I also want to know how they are going to deal with the dark coven witches. Despite the problems I had with the story it was still a quick and easy read that kept my attention and I think it does contain information that fans of the series will need to know before they pick up the final book.