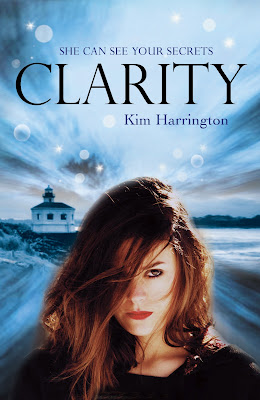 Clarity "Clare" Fern sees things. Things no one else can see. Things like stolen kisses and long-buried secrets. All she has to do is touch a certain object and the visions come to her. It's a gift.

When a teenage girl is found murdered, and Clare's brother becomes the prime suspect, Clare knows she must use her talent to prove his innocence. But as she becomes tangled in a web of fear, revenge and lust, Clare discovers that truth can be the hardest thing to see.

Will Clare's sight help her when she needs it most?

Review:
Clarity (or Clare as she prefers to be known) comes from a family of psychic abilities - she can read the history of objects that she touches, her mother is a telepath who can read people's minds and her brother Perry is a medium who can speak to ghosts. Clare is forced to spend the majority of her summers helping her family give readings to tourists, she'd rather be spending time at the beach but doesn't have much choice because they need the money. When a teenage girl is murdered and her brother becomes the prime suspect Clare is determined to use her ability to prove his innocence. First she has to convince the town's new detective (and his son Gabriel) that her abilities are real and she isn't the freak that everyone seems to think she is.

I have to say I really enjoyed reading Clarity and it has definitely made me want to read more from Kim Harrington. The story was such a quick and easy read and I really enjoyed guessing at who was behind the murder - I think I suspected pretty much everyone at some point during the book! Clare was a fab main character, she is so spunky and despite the fact that she is teased and bullied by other students at her school she gives just as good as she gets. She doesn't sit back and take abuse from anyone and was always ready with a witty comeback for anyone who insulted her. You have to admire someone who stands up to bullies - it is something I wish I'd been able to do when I was at school.

Clare has two rivals vying for her attention and it was hard to pick who would be the better bet. I think I was less suspicious of her ex-boyfriend Justin, he has proved that he will always be there for her and he has stood up for her in the past. However, I don't think I'd be able to forgive him for the thing that lead to his break up with Clare. I'm not going to go into detail so I'll just say I don't think there is any excuse for what happened and if I was Clare there would be no going back for me. I might be able to be friends but there is no way I'd want to get back into a relationship with him. Gabriel is new to the area and there is definitely an instant attraction between him and Clare. I liked him but I was a bit suspicious of him and I wasn't impressed with his attitude towards Clare when he learnt about her abilities. There was a reason for that though and once it had been explained I was more sympathetic towards his character. It will be very interesting to see how things play out for Clare and who she ends up with by the end of the series.

I loved the fact that this story has paranormal elements because of humans with psychic abilities rather than being another vampire or shapeshifter story. Don't get me wrong I like my supernatural creatures but I've read so many books about them that this made a nice change. I've always been fascinated by the idea of psychic abilities and found that side of the story really interesting. Overall this is definitely a story I would recommend to anyone who is looking for something a bit different but still with a supernatural feel to it. If you enjoy a good mystery story and a strong heroine then I'm sure you'll love Clarity!