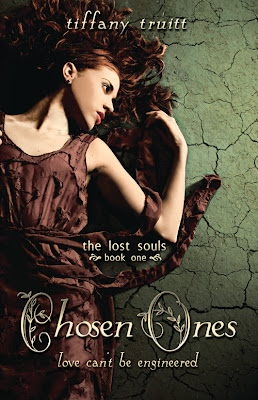 In the not-too-distant future, the world was irrevocably changed when women mysteriously lost the ability to reproduce. Faced with humanity’s extinction, the Council of Creators was begun to find alternative methods of creating life. The resulting artificial beings, or Chosen Ones, were extraordinarily beautiful, unbelievably strong, and unabashedly deadly.

Life is bleak but uncomplicated for sixteen-year-old Tess until she begins work at Templeton, a Chosen Ones training facility, and she meets James. The attraction between the two is immediate in its intensity—and overwhelming in its danger.

But there is more to the goings-on at Templeton than Tess ever knew. Will she be able to stand up to her oppressors, even if it means giving up the only happiness in her life?

The Lost Souls Series:
Chosen Ones
Naturals
Further titles and release dates to be confirmed

Review:
In a futuristic dystopian world where women are no longer able to have children the human race is facing extinction. This isn't helped by the constant war that rages between the survivors. The Council have created a race of Chosen Ones who are powerful and deadly beings that are supposed to protect the remaining humans and take their place as soldiers in the war. But everything isn't what it seems and the protectors aren't always looking out for our best interests. When Tess is sent to work at a training facility for the Chosen Ones she starts to realise the depth of corruption among those who should be protecting her but who can be trusted and how much is she prepared to pay to stand up for those who need her help?

I was really intrigued with the premise of the story so have been looking forward to reading this book for ages. Unfortunately although I enjoyed it I didn't find that it wowed me as much as I was expecting it to. Having said that I'm still interested enough in the world that the author has created that I will definitely want to pick up the sequel when it is released. I felt the beginning of the book was a little slow and I found it hard to follow the world building in places, sometimes you were given so much information in a short period of time that it made it hard to get my head around things. Once I'd got to grips with the world and the story got going the pace really picked up and the book became much more enjoyable.

Tess was an interesting character but one that wasn't particularly easy to identify with at the beginning. She starts off quite cold and emotionless, especially considering the events occurring in the opening scenes of the book and I didn't think I was going to like her at all. However, the more you get to know her the more you realise that she is putting on an act because it is expected of her. In the world she lives in women have been given the blame for the problem humanity is having reproducing, they are considered over-emotional and it is said that they have made the men weak because of this. Therefore, anyone who shows any kind of emotion is considered a trouble maker and in the world Tiffany Truitt has created the last thing you want to do is draw attention to yourself. As you get to know Tess you can't help but admire her, particularly when she stands up for someone she doesn't even know very well at a great cost to herself. I did find her a bit of a contradiction at times though - in parts of the book she was incredibly naive and slow to put two and two together whereas at other times she showed a knowledge you didn't expect her to have considering her previous actions.

I enjoyed the romance between her and James but I never felt that we got to know him as well as I needed to for things to be completely believable. Things happen just a little too quickly for my taste but I think anyone who enjoys forbidden relationships will like them. The concept of the Chosen Ones is fascinating, the idea of these children being created in laboratories and not being woken up until they are physically like teenagers was creepy and quite frankly scared me. The world that the author has created certainly isn't a comfortable one for the natural humans - it isn't meant to be.

After events in the last third of the book I'm really curious to see how events play out in the next book. I'm not quite sure how I see things resolving in the future so it will be interesting to see what happens. Although Chosen Ones wasn't my favourite book of the year it is certainly unusual in it's premise and well worth a try if you like this kind of dystopian world.