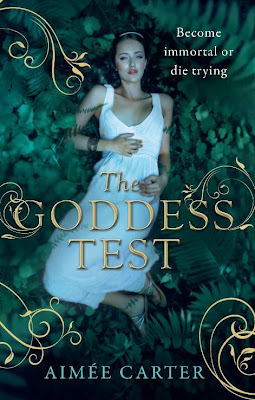 Every girl who has taken the test has died.
Now it's Kate's turn.

When her mother's dying wish is to return to her home town, Kate's willing to do anything to make it come true. Even if it means starting at a new school with no friends - and no hope.

Then she meets Henry. Dark, tortured and mesmerising, Henry offers Kate a reprieve. She thinks he's crazy. Yet when he brings a dead girl back to life right in front of Kate's eyes she's not so sure any more...

Claiming to be Hades, God of the Underworld, Henry's prepared to make Kate a deal.

If she succeeds, she'll become a goddess - and Henry's bride. If she fails she'll never see her mother again...

Review:
I was really excited about reading The Goddess Test. I love Greek mythology so the idea of Kate having to pass seven tests to save her mother's life had me really intrigued. I was expecting an action packed story line with Kate venturing into the depths of hell or at least trying to find her way through a labyrinth to fight a minotaur so I found myself very disappointed by the slow pace of the story. Not to mention the fact that Kate didn't even know when she was facing her tests so they were completely off my radar!

I felt there was so much potential to the story, especially at the beginning when you are watching Kate try to cope with her mother's illness. Some of the scenes between them were quite heartbreaking and having watched a family member fight a similar battle I really felt for everything that Kate was going through. However once Kate arrived at Henry's mansion things started to go downhill for me. The relationship between Kate and Henry felt forced and completely unreal, I didn't believe that either of them had feelings for the other. Kate found him attractive sure but we didn't see them spend enough time together for them to get to know and like each other. I also always felt that Henry was still in love with his first wife Persephone so how was I supposed to believe he had feelings for Kate?

The big reveal about what Kate's tests had been just didn't make sense. I can't say too much because I don't want to give you spoilers but I didn't feel that Greek Gods and Goddesses would care about the things they supposedly tested her on - if you look at any Greek myths it is quite clear that they don't look at sins in quite the same way a Christian would. I was also annoyed when the Gods and Goddesses revealed themselves - it felt like everything Kate had been through was a lie and if I was in her place I would have been livid with the tricks they had played on her. It even took away from the seriousness of her mother's illness and I just don't think there is ever a reason to make light of cancer. Watching someone waste away from cancer is one of the worst things I have ever been through and I don't take kindly to the way things played out in this story.

Overall I'm afraid to say that The Goddess Test completely failed to live up to my expectations. I hoped for a fast paced, action packed read and unfortunately that isn't what I got. I probably will still try the second book in the series because the publisher sent me both books for review but at the moment I don't have high hopes for it. Perhaps I'll be pleasantly surprised though.