Review: Let Me In - Callie Croix 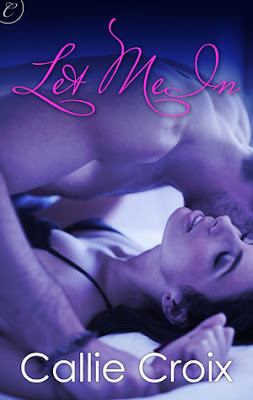 On leave for Thanksgiving, the last thing marine lieutenant Talia Barnett expects to find is Liam Brodie waiting for her at the airport. He's had a starring role in her fantasies for the past two years, and although she'd love to make them a reality, she has a dark secret that prevents her from taking things further.

A former marine, Liam's speciality is planning tactical operations, and that's just what he plans to do to win Talia. The woman has kept him at arm's length for too long, and this time he's finally going to claim her—body and heart.

What begins as comfort quickly turns hot. When Liam shows Talia a hint of the dominant nature inside him, the submissive part of her flares to life. Though she desires him, she's going back on deployment and doesn't want to dump all her drama on him. Will he find a way to break through the protective walls around her heart and convince her they have a future that goes far beyond the bedroom?

Review:
Talia is a lieutenant in the marines and has come home from Afghanistan on leave for Thanksgiving. She doesn't have a close relationship with her mother so is expecting to spend the holidays alone in a hotel. It comes as quite a surprise when her best friend Angie picks her up from the airport along with her brother (and Talia's crush) Liam. Angie is like a sister to Talia and she adores her whole family, she may have had strong feelings for Liam since she met him but she would never take it further and risk losing his friendship and the normality she gets when she spends time with him and his family. Liam knows that Talia is hiding something about her past and is determined to get her to open up and let him in.

Let Me In is the first story I've read by Callie Croix but it definitely won't be the last. It was a fab short and sweet erotic read that I thoroughly enjoyed. Talia had a difficult upbringing with a mother who suffers from severe depression that has led to other mental health problems. Talia is heartbroken for her mother and has spent years looking after her and helping keep a roof over her head but she is tired of having to cope with it all. Liam wants to help her but she is scared to let him in, she worries that if he discovers just how deep her mother's issues go then he will walk away and she'll never see him again. But Liam isn't about to walk away from the woman he has spent years fantasising about. He doesn't just want Talia's body - he wants to win her heart and he wants to get close to her and help her shoulder her burdens.