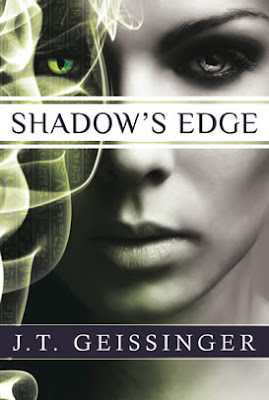 Deep within the primeval forests of southern England, a race of beautiful, savage shape-shifters lives hidden from the everyday world. Bound together by ancient bloodlines and a ruthless code of secrecy that punishes traitors with death, the Ikati send their leader Leander on a mission to capture one raised outside the tribe before she can expose their secret. When Leander tracks the unsuspecting outsider to Southern California, the hardened warrior is prepared for a fight—but not for the effect the sensual young beauty has on his heart.

Jenna spent her childhood in hiding, on the run from someone—or something—her parents refused to discuss. She trusts no one, not since her father’s mysterious disappearance, not since her mother’s sudden death, and definitely not since she began exhibiting strange, superhuman abilities. When handsome, enigmatic Leander appears, promising answers to the mysteries that shroud her past, she knows she shouldn’t trust him either. But their connection is undeniable, and as powerful as the enemy hell-bent on destroying every one of their kind...

Review:
Jenna has spent her whole life on the run but was never really told what she was running from. Her father vanished when she was a young child and since her mother's death all she has wanted is to settle down and find somewhere to call home. When the mysterious Leander arrives on scene she knows she should be hiding from him but he promises to answer her questions about her family and the strange abilities that she has had since childhood. Can she trust this stranger or should she have listened to the warnings her parents gave her? Now she is trapped in his world and told that she must obey the rules of the Ikati but can she find a way to be free?

I read a lot of paranormal romance stories and love coming across different shape shifters so I was very keen to read J.T. Geissinger's debut novel. Although I have come across cat shifters before I was very pleased that the author has put her own spin on things and Shadow's Edge is the start of a promising new series. I really loved finding out about the history of the Ikati who have links back to ancient Egypt when cats were worshipped as gods. Also as a Brit I loved the fact that the Ikati compound is hidden away in the New Forest - I'm sure anyone who has ever been there would have no problem with the idea that a secret community is hidden deep in the forest where no one ever ventures. It's nice to read a story set in the UK that doesn't focus on London and instead takes you out into the countryside and I felt the author did a great job of describing the area for us.

I don't want to give too much away about the story so I'm not going to go into detail about the abilities that Jenna, Leander and the other Ikati have but I really enjoyed discovering them and I liked the way that everyone seems to have a unique ability alongside the common ones that most of them share. I loved the way the author describes the way they see and smell their surroundings, I don't think I've come across a novel where that much detail is included before (and I don't mean that in a negative way because it never overtook the story - just complimented it).

Jenna was a great character who had a lot of inner strength and although she was completely out of her depth in the world she was dragged into she wasn't going to sit back and accept everything she was told. I appreciated the fact that she stood up for herself, especially against all the male alphas who were trying to control her. Things do develop fairly quickly between her and Leander but because I was able to feel the connection between them I didn't have a problem with that. Leander was everything you'd expect from an alpha male - he is controlling, dominant, pushy and protective of his family and his pack. However, he also knew when to back off and give Jenna some space and towards the end of the book he showed his true worth by letting her take control of the situation.

Shadow's Edge was a great start to the series and an impressive debut from J.T. Geissinger. I'm looking forward to learning more about the Ikati and I'll be first in the queue to pick up a copy of Edge of Oblivion when it is released later this year. Recommended for paranormal romance fans who are looking for cat shifters with a difference.