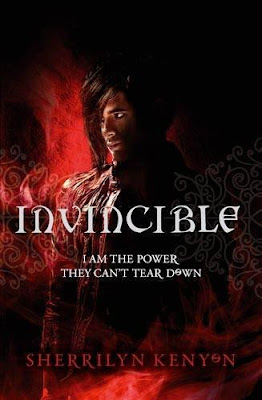 They say when you're about to die, you see your entire life flash before your eyes.

When teenager Nick Gautier is saved from almost-certain death by a mysterious warrior, he has a feeling his life is about to change. Fighting the undead has taken the place of fighting with his teachers (well . . . almost).

But just when he thought things couldn't get any worse, he wakes up to find himself enslaved in a world of shapeshifters and demons out to claim his soul. If he doesn't learn how to raise the dead by the end of the week, he will become one of them . . .

Review:
Invincible is the second book in Sherrilyn Kenyon's YA spin off to the Dark-Hunters series. The Chronicles of Nick books star 14 year old Nick Gautier as he is first drawn into the Dark-Hunter's world after starting to work for Kyrian. I have to admit that I'm not up to date with the Dark-Hunters series, in fact I've only read the first couple of books so I haven't seen much of Nick as an adult. I'm getting to know his younger self first through this series and will be interested to see more of him as I catch up with the adult series too. I enjoyed the first book in this series, Infinity, but I did find it a little confusing at times because I wasn't familiar with this world or what the Dark-Hunters actually were. Now that I've started the other series I found this second instalment easier to read and I enjoyed it even more than the first book.

The story picks up immediately after the end of the first book, Nick is trying to come to terms with everything he has learnt about himself and the paranormal world that he now finds himself in. He has no idea what the full extent of his powers are but he knows that he needs to master them as soon as possible. As if school wasn't bad enough when zombies were taking over Nick now finds himself being blackmailed by the new football coach into stealing from his fellow players. But what does the coach want with the items that he has asked Nick to acquire for him and why are so many 14 year old boys being murdered?

I loved Nick's character in the first book and the more I get to know him the more I like him. I love the way he is so close to his mother, she had him when she was very young and faced a difficult struggle to raise him after her parents kicked her out of home when she was pregnant. Nick has a lot of respect for his mum and as much as she might drive him insane at times (don't all parents irritate their teenage children?!) he won't hear anyone say a bad word about her. In fact he does his best to try and take care of her and treat her to things that she can't afford to buy for herself. Nick's mother can be quite strict but she has raised him to always do the right thing and that really shows in his character. He is smart, fiercely protective of the women in his life, loyal to those he cares about and he always tries to do the right thing. When he is forced into the position of stealing from his team mates it hits him really hard and you can see how much he hates to do something that he feels is so wrong.

Nick is still getting advice from his mysterious mentor Ambrose and we find out a lot more about who he is and what he's up to in this book. It isn't always easy for Nick to decide who is on his side, should he always listen to Ambrose's advice or make up his own mind about people? Demon Caleb is still on the scene and starting to feel like a friend to Nick, although Caleb says that he only protects Nick because he has to I definitely get the feeling that there is more to it than that. I'm also very curious about Kody - I want to know more about what she is and who she is working for because there is definitely more to her than we've seen. I absolutely adore Simi and she steals the show for me every time she steps onto the page - you can't help but laugh at her weird way of talking and the strange things she comes out with.

The story is fast paced and kept my attention from beginning to end. I'm looking forward to reading Infamous and finding out what happens next. I also really need to get around to catching up with the Dark-Hunters books so I can try to figure out what it is that Ambrose is trying to change about Nick's future!