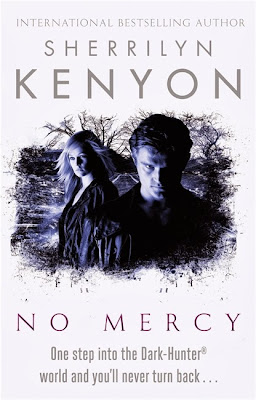 Shapeshifter Dev Peltier thought he knew it all. But one night when a Dark-Hunter, who is also an official member of the Dogs of War, sashays into his bar, he realises that he might have met his match.

Samia, aka Sam, was one of the fiercest Amazon warriors in her tribe. But an act of brutal betrayal made her a Dark-Hunter and she's been angry ever since. Live fast, fight hard and enjoy the night. That's her credo. But as old enemies and new move into New Orleans, she realises that Dev might just be the only hope she and mankind have to save the world.

Review:
Samia was an amazon warrior before she sold her soul to Artemis for an act of revenge and became a Dark-Hunter. Now she uses her fighting skills to protect humans from daimons and trying to keep the world in balance. She has been called to New Orleans by Acheron to help protect Nick and it's there that she meets shapeshifter Dev Peltier. Dev is the first person who is unaffected by Samia's magic which means he's the first person she's been able to touch without being inundated by his thoughts and feelings but the last thing she really needs in her life at the moment is romance, especially with a possessive bear who wants to claim her as his own.

My favourite Dark Hunter stories tend to be the ones set in New Orleans where we get to see all our favourite characters like Ash, Savitar and Nick so I had high hopes for No Mercy. I did really enjoy the romance between Sam and Dev and I live for the appearances from Ash but I'm starting to get really bored of the daimons and in my opinion this book spent far too much time with the likes of Stryker and Zephyra. Normally my hard and fast PNR rule is don't mess with the happily ever after of previous couples but I really can't stand those two and I hate having to spend time with them. They didn't manage to redeem themselves in their own book and to be honest their actions just get worse and worse every time we see them so I keep hoping that one of the Dark-Hunters is going to just put me out of my misery and kill them both. The daimons got a really hard deal thanks to Apollyon and I'd love to see them find a way to remove the curse BUT Stryker is so horrible that he's starting to make me lose any sympathy for the lot of them.

This book wasn't awful by any means but it definitely wasn't my favourite in the series. I'd have liked more focus on the main couple and less on the bad guys. I just hope that the Stryker storyline gets resolved soon because I don't want it to continue playing a part in every book in the series.