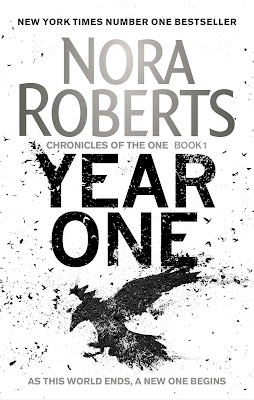 As this world ends, a new one begins.

From number one New York Times bestseller Nora Roberts - an epic, apocalyptic tale of good and evil, love and loss.

With one drop of blood, the old world is gone for ever. And in its place, something extraordinary begins...

They call it The Doom - a deadly pandemic that starts on a cold New Year's Eve in the Scottish countryside. There's something mysterious about the virus and the way it spreads. As billions fall sick and die, some survivors find themselves invested with strange, unexpected abilities.

Lana, a New York chef, has the power to move things and people with her will. Fred can summon light in the darkness. Jonah, a paramedic, sees snatches of the future in those he touches. Katie gives birth to twins, and suspects that she has brought fresh magic into the world, along with new life.

But The Doom affects people differently. Along with the light, a dark and terrifying magic will also rise. As the remaining authorities round up the immune and the 'Uncannies' for testing, Lana, Katie and others flee New York in search of a safe haven. The old world is over, and Year One has begun.

Chronicles of the One:
Year One
Of Blood and Bone
The Rise of Magics (2019)

Review:
In the wake of a pandemic that has wiped out over half the human population in a matter of days, the world has quickly become a very dark and dangerous place. Survivors fall into three camps, ones who have been gifted with light magic, ones with dark magic and normal humans. Light gifts can include telekinesis, psychic abilities, perhaps you're now a faerie or even have the ability to shapeshift while the dark gifts give you similar powers but a thirst for violence that's almost demonic. Normal humans are caught between the two factions and doing what humans do best the government decides it would be a good idea to round up all the uncanny to carry out experiments on them. Year One follows a ragtag group of survivors as they band together and try to find somewhere safe to start a new life.

I love the In Death series but I have to admit it's been a while since I read anything else Nora Roberts has published. I'm a huge urban fantasy fan though and my friend Ange raved about this book so much that I just had to give it a try. Year One is very different to anything else I've read by Nora, this is a dark and devastating world where things fall apart very quickly and civilisation as we know it is completely gone, the characters are all facing life or death situations daily and struggling to survive as they band together hunting for safety. But no matter how bad things get or how slim their chances of survival is looking there are also signs of hope that there could be a better future. There are people willing to work together, ones who go out of their way to help others and ones who share what little resources they have because someone else is in desperate need.

I think one of the things Nora Roberts always excels at is creating fantastic characters and she really shows that in this book. There is a large cast of characters and they're all following different paths but I found myself rooting for nearly all of them. You have to be prepared because in a world this dark there are going to be casualties along the way and some of the deaths really surprised me but because people know just how short life can be they live it to the fullest while they can. Friendships and love are more valuable than ever and people hold on to them fiercely.

Much of this book is about the fallout from The Doom, the way society collapses and how survivors have to learn how to survive in a more basic world without the technology we've come to rely on now. A lot of time is spent gathering likeminded survivors and searching for a place they can call home but towards the end there are some huge changes that take the story in a direction I really wasn't expecting. I can't wait to see what happens next & will be diving into Of Blood and Bone as soon as I get the chance.