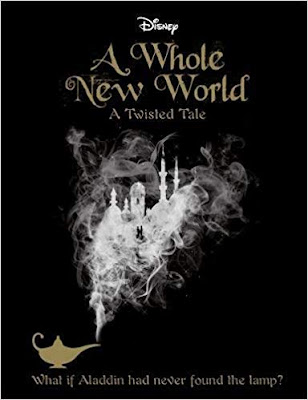 Welcome to a new YA series that reimagines classic Disney stories in surprising new ways. Each book asks the question: What if one key moment from a familiar Disney film was changed? This dark and daring version of Aladdin twists the original story with the question: What if Jafar was the first one to summon the Genie?

When Jafar steals the Genie’s lamp, he uses his first two wishes to become sultan and the most powerful sorcerer in the world. Agrabah lives in fear, waiting for his third and final wish.To stop the power-mad ruler, Aladdin and the deposed Princess Jasmine must unite the people of Agrabah in rebellion. But soon their fight for freedom threatens to tear the kingdom apart in a costly civil war.

What happens next? A Street Rat becomes a leader. A princess becomes a revolutionary. And readers will never look at the story of Aladdin in the same way again.

Review:
I grew up watching the Aladdin cartoon, it’s still one of my favourite Disney movies and I absolutely adore Robin Williams as the genie. Then last year I went to see the Aladdin musical with friends and I walked out of the theatre in the mood for Aladdin in book form, I knew A Whole New World was a twisted version of the story and it sounded like it would hit the spot perfectly so I couldn’t wait to dive in.

The beginning of this book follows the movie pretty much word for word, apart from a little extra from Aladdin’s childhood fans of the cartoon will easily be able to picture events as they unfold so I can understand why some people have said the beginning is a little on the slow side. That didn’t stop my enjoyment at all because it was exactly what I’d picked up this book hoping for.

Of course, it wouldn’t be a Twisted Tale if the story stayed exactly the same as the original though and it doesn’t take long for the story to go in a completely different direction. What would have happened if Jafar had stolen the lamp before Aladdin had discovered the genie and made his wishes? Well you’re going to have to read the book for yourself to find out that but it does involve a street rat and a princess who join together to lead a revolution.

I really enjoyed Liz Braswell’s take on such a familiar story and I’m looking forward to seeing how she twists other familiar fairytales on their head.