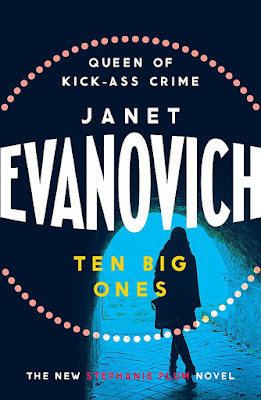 Not every witness protection programme is fool proof...

Stephanie Plum finds herself in the wrong place at the wrong time in Ten Big Ones, the tenth gripping adventure in the Stephanie Plum series by Janet Evanovich. The perfect read for fans of Harlan Coben and Lee Child.

As the only witness able to ID a gang member who has been firebombing local deli-marts, Stephanie is working overtime avoiding death threats and attempts on her life. New Jersey's hottest cop, Joe Morelli, would be more than happy to keep her safe in his house. So would her irresistible mentor, Ranger.

Stephanie doesn't know which is worse: the death threats, the overprotective men in her life, or her sister's nightmare wedding. But she does know that she's never been one to hide...

Review:
Stephanie has done it again - she's managed to get caught in the crosshairs of a gang and has a target on her back. This time she's the only witness who can identify gang members who have been carrying out a series of bombings and they will do whatever it takes to stop her from being able to testify. When it becomes clear that they know she's been living with Morelli she decides its time to find a new home base and ends up taking residence in Ranger's bat cave, what could possibly go wrong with that?

It's weird because there are a lot of things about the Stephanie Plum series that should irritate me, the whole triangle with her, Morelli and Ranger being the biggest, but these stories are just so light hearted and entertaining that things that would bug me from other authors just make me laugh here. Stephanie desperately needs to start learning some skills for her job but watching her and Lulu stumble from one disaster to the next is hilarious, especially when Grandma Mazur decides to tag along for the ride. I also really like the dynamics in the Plum family and found the wedding planning going on in this book hilarious.

I honesty don't know how Morelli puts up with Stephanie though, she seems determined to walk away from him whenever they have even a tiny argument and then kissing Ranger behind his back is just a step too far. I totally understand the attraction to Ranger, he's a mystery man who we still know very little about (although we do see more of him in this instalment which was fantastic) but it's pretty obvious that he's not a long term prospect whereas Morelli is looking for marriage and a family. I've read the first 16 books before so I know this triangle doesn't end any time soon but I really hope things are resolved eventually.

The series is definitely doing something right though, these books are often one sitting reads because they're just so light hearted and easy to devour. Really they're perfect holiday books, something to read on the beach or by the pool when you just want something that is going to make you giggle but that you won't have to concentrate too hard on and theres absolutely nothing wrong with that.