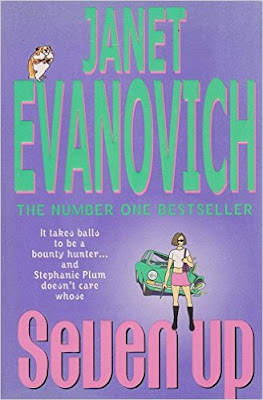 In her most explosive adventure yet, bombshell bounty hunter Stephanie Plum is dropped into a smorgasbord of murder, kidnapping and extortion - a magnificent buffet of mud wrestling, motorcycles, fast cars, fast food, and fast men.

Stephanie Plum thinks she's going after an easy FTA: a senior citizen charged with smuggling contraband cigarettes. But when she and Lula show up at his house, they get more than they bargained for - a corpse in the woodshed and an old man who's learned a lot of tricks during his years in the mob, and isn't afraid to use his gun.

But Stephanie's mind is on other matters, because she has two proposals to consider: vice cop Joe Morelli is proposing marriage, and fellow bounty hunter Ranger is proposing a single perfect night . . .

All in all, a typical dilemma in the world of Plum.

Review:
It's no secret that I love this series, Stephanie's antics and her crazy family never fail to make me giggle and these books are the perfect thing to pick up when you're having a bad day and just need something to make you smile.

You'd think that Stephanie might be getting the hang of this bounty hunter thing by now but unfortunately for her she's just as terrible as ever. Even when she's up against a pensioner things don't go to plan for our plucky heroine and her sidekick Lula. I swear these two could get themselves in trouble in a kids soft play area!

Throw in family drama with her not-so-perfect sister Valerie who has moved back home with her two daughters and put Grandma Mazur on a motorbike and you know you're going to be in for an interesting ride, especially since all that's before we even think about the two men in her life.

Stephanie somehow seems to be accidentally engaged to Morelli even though he never officially proposed and now that it looks like she's off the market (her mother is already shopping for the wedding dress and Grandma Mazur has the hall booked!) Ranger has decided it's time to up the ante and make his presence felt. What's a girl to do when she's stuck between two very hard, very hot alpha men who both want to stake their claim? Personally if I was Stephanie I'd be tempted to keep them both but I'm not sure if either Morelli or Ranger would be willing to share.

There's no point me going into detail about the plot, if you're familiar with this series you know what to expect by now and you'll love this just as much as the first six books. If you're new to the series what the hell are you waiting for - go and grab a copy of One for the Money now and prepare to laugh from start to finish.