This review includes all the short stories that have been written about Jonathan Healy and Frances Brown, stories by other narrators will be reviewed separately. 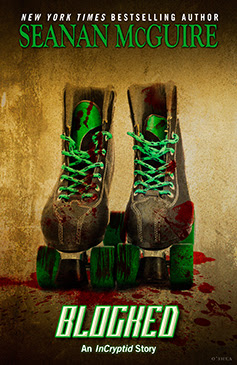 Antimony Price likes her life. She likes her high school, she likes her friends—even if none of them really know her as anything more than another face in the halls—and most of all, she likes her place on the cheerleading squad, where she understands what's expected of her, and delivers with grace, style, and a viciousness that has done a lot for her team's reputation.

Too bad it's time to graduate.

Now adrift in a world that doesn't have the rules she's used to or the protections she had worked so hard to shape, Antimony has to find something else to keep herself busy...and her cousin, Elsinore, has a few ideas about what that something might be.

It's time for Antimony to meet the wide, wonderful world of roller derby. Let's hope that she survives the experience—and that everyone else survives her.

Review:
This is the first chance we've had to spend much time with Verity's younger sister Antimony. As the youngest Price sibling you'd expect her parents to be a bit more relaxed but it actually seems like they're more protective about her than they are about her brother or sister.

Antimony has just finished high school, where she was a star member of the cheerleading team, and now she's at a loose end. Her parents want her to find something new that will have the same effect of helping her interact with others while keeping physically fit but whatever she chooses it has to be something that keeps her out of the spotlight so joining a major college cheer team is out of the question. She's actually quite resentful when her parents block the choices she would like to make but then her cousin suggests she try out for a local roller derby team.

I have to admit this wasn't my favourite short story in the Incryptid series, mainly because it's very short and not a great deal happens in it. I did enjoy meeting Antimony though and I'm hoping that in the next few stories about her we'll get the chance to see a bit more action and some members of the Cryptid community. 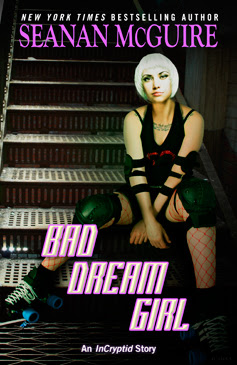 Growing up as the youngest of three is never easy. Doing it when your brother is a genius and your sister is a world-class ballroom dancer is even harder. Doing it as the latest in a long line of cryptozoologists, monster-hunters, and fugitives? Borderline impossible. Maybe that's why Antimony Price needs to blow off steam every once in a while. Her extracurricular activity of choice? Roller derby.

Under the name "Final Girl," Antimony Price skates for the Slasher Chicks, a flat-track roller derby team and part of the larger Silver Screams derby league, skating out of Portland, Oregon. She never expected work to follow her onto the track, but now derby girls are collapsing, and someone could be seriously hurt if the cause isn't uncovered in time. But no pressure.

With the help of her cousins Elsie and Artie Harrington, and her friends on the track, can Antimony prove that she chose the right derby name, and really make it to the end of the bout? Because this Final Girl is in one hell of a lot of danger...

"Bad Dream Girl" was originally published in the Apex anthology Glitter and Mayhem, released in August of 2013. Copies are available from a bookstore near you.

Review:
We saw Antimony's tryouts for roller derby in the previous short story but in this one she's a full member of the team and she loves every minute of it. She joined the Slasher Chicks as a way to keep fit and for the chance to hang out with other humans when she's not helping her family with incryptid related problems but when girls start to collapse mid game it looks like her two worlds are about to collide, so if she can't figure out what type of incryptid is causing problems - and find a way to stop them - then it could be her life that is at stake.

I'm glad we're getting the chance to get to know Antimony a bit better, she's the youngest price sibling and hasn't played much of a role in the main series yet but I'm hoping that'll change now she's getting older and starting to establish herself outside of school. It's not easy for her because her family all treat her like a child, they don't seem to take her seriously and often end up blocking her from doing things she wants to because they're afraid to let her take any risks which is really frustrating. She's starting to prove her value though and it's nice to see her confidence growing. 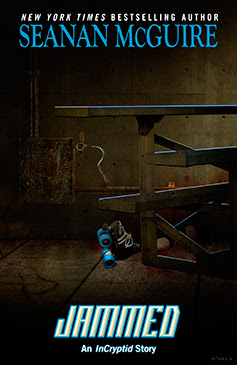 Antimony has finally gotten her groove back. She has friends on her roller derby team; she has her cousins to keep her company; and she has, for the most part, managed to keep her off-the-track activities from bleeding over into her social life. So what if she's a professional cryptozoologist and occasional monster hunter? There's no reason for that to change anything.

Until there is. Until one of the jammers on the Concussion Stand is found dead during a match; until her cousin Elsie is shouting at her to make things right, because Elsie's girlfriend Carlotta is the Captain of the dead woman's team; until it becomes crystal clear that whatever killed the skater, it wasn't human.

Antimony must decide which matters more: getting justice for the dead, or maintaining her cover as "just another skater." And she'll have to decide quickly, because the killer is still at large, and whatever it is, it doesn't seem likely to stop with just one skater...

"Jammed" was originally published in the anthology Games Creatures Play, released in April of 2014. Copies are available from a bookstore near you.

Review:
As much as I love the Incryptid series I just don't feel that connected to Antimony yet and her stories are the least interesting ones I've read so far, possibly because I'm a bit bored by all the roller derby references. Perhaps I'd find them more interesting if I was a roller derby fan but unfortunately I'm not.

This story has more action than the previous two though as Antimony has to team up with her Cryptid teammates to solve a murder. I think I'm just missing the family dynamics, we only really see Antimony interact with her cousin Elsie and I don't really like her all that much so even the phone conversations she has with Artie don't quite save it. I'm missing the Aeslin Mice too, it only just occurred to me that they've been completely absent from this series of short stories so far. 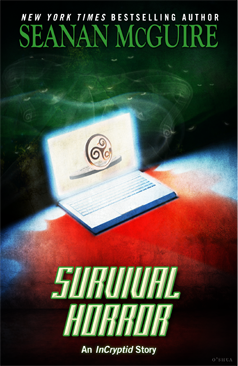 When Antimony heads for her cousin Artie's place to spend the day reading comic books and avoiding the rest of her family, she's expecting a peaceful afternoon. She's not expecting a hostile video game to try to kill them both. But sadly, when the Price family is involved, unexpected threats from seemingly innocent and unlikely places are pretty much par for the course.

If they want to survive the day, Annie and Artie will need to navigate a maze of riddles, puzzles, and irritating programmers, all of whom seem to have approached their game design with one goal in mind: to wipe two of the youngest members of the extended Price family off the face of the Earth.

It's going to be a marathon session, and this time, if you die in the game, well. You die for real.

"Survival Horror" was originally published in the anthology Press Start to Play, released in August of 2015. Copies are available from a bookstore near you.

Review:
This is definitely my favourite of the stories written about Antimony and that could well be because we get to see her away from the roller derby this time around. She's supposed to be spending a relaxing afternoon with her cousin Artie reading comic books and talking about X-Men but things take a turn for the worse when Artie downloads a new computer game from a forum he's a member of and they find themselves in a life or death situation. They either solve a series of puzzles to complete the game or they'll be sucked into another dimension and left to fend for themselves.

I really enjoyed getting to see more of both Antimony and Artie in this one. Antimony is used to solving problems with her fists but there is nothing physical to fight here so the pair are going to have to use their brains if they want to come out on top.
at 12:00