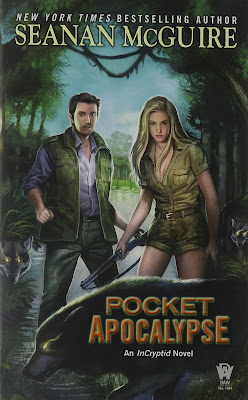 Alexander Price has survived gorgons, basilisks, and his own family no small feat, considering that his family includes two telepaths, a reanimated corpse, and a colony of talking, pantheistic mice. Still, he s starting to feel like he s got the hang of things at least until his girlfriend, Shelby Tanner, shows up asking pointed questions about werewolves and the state of his passport. From there, it s just a hop, skip, and a jump to Australia, a continent filled with new challenges, new dangers, and yes, rival cryptozoologists who don t like their visiting expert very much.

Australia is a cryptozoologist s dream, filled with unique species and unique challenges. Unfortunately, it s also filled with Shelby s family, who aren't delighted by the length of her stay in America. And then there are the werewolves to consider: infected killing machines who would like nothing more than to claim the continent as their own. The continent which currently includes Alex.

Survival is hard enough when you re on familiar ground. Alex Price is very far from home, but there s one thing he knows for sure: he s not going down without a fight.

Review:
In Pocket Apocalypse we continue to follow Alex's journey but this time we get to see him travel to Australia with Shelby to help her family deal with a Lycanthropy outbreak. I've come across a lot of different werewolves over the years, from scary monsters to ones who have complete control over their transformations and I have to say that Seanan McGuire's are some of the creepiest I've read about. In this world Lycanthropy is a disease and it if you're infected it changes your body in all kinds of horrible ways. What makes it even worse is that it's not only humans who can be infected and the disease can pretty much be spread to any mammal. The smaller ones don't tend to survive their first transformation but larger animals end up becoming pretty terrifying when they're also werewolves. The prologue showing Alex's first encounter with werewolves was scary but there was a scene later on in the book that was enough to give me nightmares!

Anyway, Australia is a closed ecosystem and they've never had to deal with werewolves before so when Shelby finds out what is going on back home she asks Alex to go with her to help her family. Alex is pretty terrified of werewolves but there is no way he can let Shelby deal with the situation alone so, along with a splinter colony of six Aeslin mice, they set out to help. I think at this point I have to say again how much I adore those mice, I wish I could have a colony of my own and they are always a highlight of these books! I love how devoted they are to the Price family and it always makes me smile when they mention Alex's ancestors, especially when they follow rules that were set by previous members of the family.

I enjoyed getting to see Alex out of his element, Australia is a very different environment to what he is used to and we meet some interesting local Cryptids but the thing that really bothered me was the way Shelby's family and the rest of the Thirty-Sixers treated him. I could kind of understand that her family don't want Shelby to fall in love with an American and end up moving away permanently but considering Alex has put his life at risk to come and help them I was annoyed by the way they acted. Even if you ignored her father's posturing and threatening the new boyfriend attitude there was no excuse for the way the society treated a visiting expert - the ONLY person they had around with any previous werewolf experience. Their utter ignorance and refusal to listen to reason ended up causing some pretty devastating consequences and I've not forgiven them for that yet.

I did love the way Shelby stood up for Alex though, she told her family in no uncertain terms that Alex was going to be a permanent part of their lives and they just had to deal with it. I've really grown to respect Shelby in this book, I liked her before but now I'm totally rooting for them as a couple. Shelby has learnt a lot about Cryptids from Alex and his family and she wants to share that information with the Thirty-Sixers, she realises that they've made mistakes with how they've dealt with certain creatures in the past and she's willing to apologise and make things right in the future. Unfortunately the Thirty-Sixers are much less willing to see where they've been going wrong and I'm not convinced they'll change their ways any time soon. Alex also goes on a sharp learning curve in this book, his family have only had limited dealings with werewolves in the past and he makes a lot of new discoveries here that he's going to be able to share with everyone else when he returns.

I'm having so much fun reading this series and I've really enjoyed getting to know Alex and Shelby but I'm equally excited that we're getting to revisit Verity and Dominic in the next book before moving on to Antimony's story. I hope that we've not seen the last of Alex though, I'd like to see this series continue for a long time and keep switching up the narrators so we get to carry on spending time with everyone.