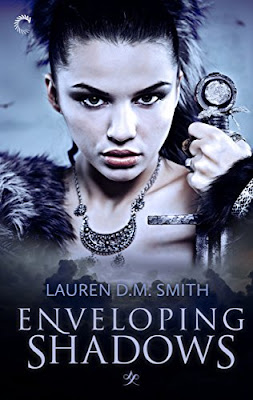 A fierce and beautiful warrior.
A man of secrets and shadows.
Only together can they stop the awakening horror.

Rumors of monsters and dark magic are circulating through the court, but Terrwyn is little concerned. Her superb sword skills are all she needs to protect the princess Aricia—and as chief bodyguard, the princess's safety is Terrwyn's only mission.

Too late, she realizes her mistake: a stranger cloaked in darkness snatches the princess before Terrwyn can react.

When a handsome stranger emerges from the shadows to save her life, Terrwyn has little choice but to allow him to accompany her. Zelek, shrouded in secrecy and on a mission of his own, has special skills that Terrwyn needs.

Together the warrior and the shadow-whisperer forge a plan to rescue the princess, and find themselves plummeting not only headlong into evil, but into the depths of passion and love.

Review:
After really enjoying The Emperor's Arrow I jumped at the chance of reviewing Lauren D.M. Smith's second book, Enveloping Shadows. I have to admit I was hoping she might continue expanding the world she'd already built, she'd already put so much thought into it and I thought it would be fun to explore some of the different cultures through some of the side characters we met in the first book. I was a little disappointed when I realised that this book was set in a whole new world but I still had high hopes because the author has already proved herself a creative world builder.

Unfortunately I didn't enjoy this book as much as the first one and that's mainly because I found it much harder to connect with the characters. Terrwyn is a female knight (how brilliant is that!) and she's also princess Aricia's chief bodyguard so when the princess is kidnapped she understandably blames herself. She is determined to do whatever it takes to rescue the princess, no matter how much danger she has to face to do it. I found it a little odd that when the king asks for volunteers for the rescue party only two knights beside Terrwyn actually step up to the challenge. I know why the author did it but it just seemed so uncharacteristic of knights to be such cowards. I don't think it's much of a spoiler to say that it's not long before Terrwyn is left on her own to go and rescue Aricia and she ends up teaming up with Zelek, a mysterious stranger who is on his own mission, along the way.

Terrwyn is a hard character to spend time with, I loved the fact that she was a fierce and capable fighter but she was full of contradictions that just didn't make sense to me. She's one of only a handful of female knights so she's very used to living in a male dominated culture but she's never let that stop her from achieving her goals and she's obviously the best of the best or she wouldn't be the princess's top bodyguard. That side of her is brilliant and I also liked the fact that she's not an innocent virgin who has no idea about her own desires, except, well she actually kind of is. She'll tell you she's experienced but the minute Zelek steps onto the page she turns into a shy 14 year old girl suffering from her very first crush. You know the type I mean, the one who blushes every time the boy speaks to her and watches him out of the corner of her eye because she can't bring herself to look openly? That would be fine if I was actually reading about a teenage girl but it doesn't fit a 20 something female warrior who has had several lovers already. Zelek even assumes she is a virgin and takes things extra slowly so he doesn't scare her off and it was an understandable mistake to make considering how skittish she is! Zelek is more likeable and his ability to use the shadows is an interesting one but he wasn't enough to save the story for me.

Lauren D.M. Smith has definitely got some interesting ideas that show up in Enveloping Shadows, I love the idea of being able to control shadows and wish we'd had a chance to find out more about it. I think half the problem is that the author has all these great ideas but because she seems to be writing standalone (and fairly short) stories in lots of different worlds she never takes the time to fully explore these ideas and expand on them. If either this or her previous book was the start of a series there would be so much potential to delve deeper into both the worlds and the characters and I think it's a shame that opportunity is being missed. Unfortunately Enveloping Shadows was a miss for me but I enjoyed The Emperor's Arrow enough that I'll still give her next book a try, let's hope that this one was just a blip.