This review includes all the short stories that have been written about Sarah Zellaby & Arthur Harrington, stories by other narrators will be reviewed separately.


Short Stories narrated by Sarah Zellaby and Arthur Harrington (circa 2013-):
(Unless otherwise stated all stories are available for free on the author's website)
IM 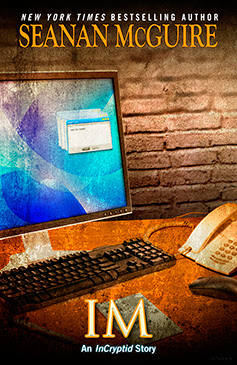 Arthur Harrington's situation is...special, thanks to having an incubus for a father and a semi-stable grasp of his "special powers" (if you can call them that). As a consequence, he's always been allowed to stay somewhat sheltered from the family business, communicating with the outside world largely via the computer and his cousins.

Then Sarah got hurt. He's been climbing the walls ever since, trying to think of something he can do to help—but when no one really understands the way a cuckoo's mind works, what can he possibly do to make things better? Especially when she's in Ohio and he's in Oregon?

Review:
IM is one of the shortest stories that Seanan McGuire has written for this series but that doesn't mean it's not worth reading. This isn't one for people who are new to the series but it adds another layer for fans who have read the first two books so as long as you go in expecting something short and sweet I'm sure you'll enjoy it.

We all know how much Artie has been missing Sarah since she injured herself saving Verity's life. He's spent weeks waiting for his best friend (and the love of his life even though he won't admit that to anyone else in his family) to recover and although she has been making improvements she's still not back to her normal self and Artie hasn't been allowed to see or even speak to her. It's driving him crazy that he can't do anything to help her but then he gets just a tiny glimmer of hope that Sarah is starting to get back to her old self again and that's all he ever wanted.

Artie is utterly adorable in this. It's hilarious that he thinks he has managed to keep his feelings for Sarah secret from the rest of his family but I'm sure they'll all start meddling again as soon as Sarah is back to full health. I really hope we might get a full length book or two about them at some point in the future.
at 09:00