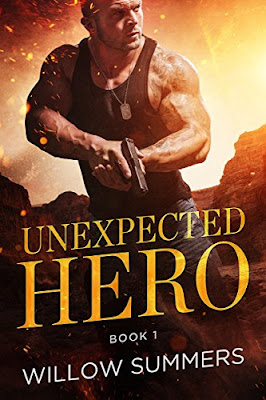 All Jenna wants is to grace the NYC skyline with a building of her design. But to do it, she must tear down a neighborhood riddled with dangerous criminals who will stop at nothing to claim vengeance.

Sent away from the threat for a week long tour in the wilds of Colorado, Jenna meets a stranger so intense her desire is equally mixed with fear. Tall, built, and incredibly handsome, he isn't what he seems.

After a mission gone badly wrong, Josh left the SEALs without looking back. Haunted by his past, he hides his identity in order to pick up the pieces. But when he meets the sassy architect, the control he tries so desperately to hang on to, flees.

As their mutual attraction and constant battle of wills sets their bodies aflame, danger once again finds Jenna. Josh must face his past if he ever hopes to bring Jenna out of the wilds alive.

Review:
Jenna is an architect who has been working on a major new project along with the rest of her team. There is a slight issue with the location for their new building though - it is currently being used by criminals for a money laundering operation and the gang understandably don't want to see the property rebuilt. As things heat up and staff come under threat Jenna's whole team is sent away on a retreat in the middle of nowhere while their boss tries to resolve the issues. Josh is working as a guide for the company that organised the hiking retreat while he licks the wounds he received when working for the military. He doesn't like people much and would rather keep his distance from the world but when trouble comes calling he's exactly the kind of man you'd like to have at your back.

I'm a huge fan of K.F. Breene's Warrior Chronicles series so as soon as I heard about this series (written under pseudonym Willow Summers) it went straight to the top of my wish list. It's fair to say I had high expectations but unfortunately the story didn't quite live up to them. It's not a bad book by any means and I will continue the series but there were a few issues that stopped this from being an amazing read.

I think the main issue was the lack of suspense, for the majority of the book the only thing I was worried about was who was going to get attacked by Jenna's rapist-in-waiting colleague Dale. There was no buildup of tension, no real sense of danger and watching the group traipse around the countryside frankly started to get a bit boring. I get that the author was giving us time to get to know the characters but I think it could have been handled better. Another major no-go for me is the fact that that the hero and heroine had sex without using protection. It's even worse because she is on the trip with her boyfriend so she ends up having sex with two different men in a day and not using a condom with the guy she only just met! She does break up with the boyfriend first so she wasn't cheating but it's the lack of condom that really bothers me. The first time they have sex neither of them even think about protection and the second time they start with a condom but for some completely bonkers reason remove it halfway through and finish without it. What on earth was that all about? I'm now completely convinced that Jenna is going to end up pregnant before the end of the series but I'm really hoping I'll be proved wrong about that.

Also, let's backtrack and discuss Dale for a minute. He is an architect who is obviously working for a respectable company but the way he acts is beyond ridiculous and totally unacceptable. He stares at his female colleagues constantly making offensive comments and grabbing at them at every possible opportunity but nobody takes him to one side and tells him to stop? He is so bad that the women can't go anywhere unaccompanied because they genuinely fear that he will attack them and they even have to warn women from other groups to keep their distance and watch out that he doesn't follow them. I'm sorry but this just isn't acceptable, why was he even allowed on this trip in the first place if he can't be trusted to act like a normal human? Why wasn't he fired from his company years ago for sexual harassment? Why do we even need a character like him in the book except to add a sense of danger that isn't coming from anywhere else and to have a convenient target when things start to go wrong? I don't like the threat of rape being used as a cheap plot point when it doesn't add anything to the story, it makes me incredibly uncomfortable and I just don't think it's necessary.

So I've complained about a lot of things that didn't work for me in this book but there were positives too. I really liked Jenna's character, I appreciate a woman who knows what she wants and I like that she's so independent. She can be quite abrasive and holds herself a little distant from the people around her but it made a nice change to read about a heroine who doesn't feel the need to be liked by everyone around her. Josh was great too, he obviously has a lot of demons chasing him from his time in the military but at the moment he's a man of mystery and I'm looking forward to finding out his secrets. The chemistry between these two was great and the sex was hot when I wasn't stressing about the lack of a condom. There are a lot of humorous moments and Jenna's best friend Erika really balanced out Jenna's awkwardness, the friendship between them was brilliant though and it was lovely to see how they stood up for each other.

Unexpected Hero was a little slow in the beginning but the pace picked up nicely towards the end and that's what left me wanting to read more. I have high hopes that the next two books are going to be much faster paced and I'm looking forward to seeing how things play out. I'll warn you now that the book kind of ends right in the middle of things so you'll definitely want to have the sequel to hand so you can dive right in after finishing this one.