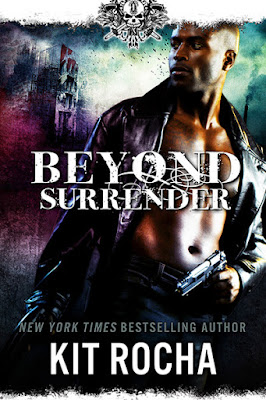 She’s the heart of O’Kane liquor.

For years, Nessa has been focused on work. She keeps the whiskey—and the money—flowing, and life is sweet. Sure, she’s tired of being everyone’s baby sister, and she longs for a man who can stand up to her overprotective O’Kane brothers. But she never thought she’d meet him in the middle of a war.

He’s the brains of the revolution.

War is all Ryder knows. He was raised with one goal: to ensure the sectors’ successful rebellion against Eden. His father and his mentor both died for freedom, and nothing will stop him from securing their legacies with victory. He doesn’t have time for distractions—especially beautiful, impulsive ones like Nessa.

Opposites don’t just attract, they combust. Together, Nessa and Ryder have a chance for something more than the lives they’ve always known. But this is war—deadly, bloody war—and the only way to happily-ever-after is straight through Eden.

Review:
Beyond Surrender is the final book in Kit Rocha's Beyond series but don't worry because it's not quite the last we'll see of the O'Kanes. We're moving sectors in the upcoming spin off series but the authors have confirmed we'll still see some familiar faces occasionally while we're getting to know a new bunch of characters in Gideon's Riders. I want to focus on this series for now though and the epic conclusion that we get to see here.

Beyond Surrender is the culmination of the story arc that has been building for eight books now, war with Eden is upon us and things are about to get even more dangerous than ever before. Although the romance focuses on Nessa and Ryder (more about those two later) this book is so much more than that and it gives us glimpses of most of the previous characters as we see the roles they all play in the O'Kanes biggest battle yet. Nobody is safe and war is a brutal thing but the O'Kanes have always been willing to fight to protect the people they love and their freedom. I'm not going to lie, this book is heart wrenching in places and there were moments that broke my heart and left me sobbing like a baby, I cried for their losses but I also laughed and cheered for the characters through their victories and I did have a huge smile on my face at the end.

I did wonder if Nessa and Ryder's romance might end up getting sidelined because so much else was happening in this story but their relationship didn't feel at all rushed. Things moved fast between them sure but the urgency of their situation just ramped up the feelings that have been building between them for a long time now. Nessa has been with the O'Kanes since she was a teenager and it's meant that all the men look on her as a kid sister, she's been protected and cosseted by the whole gang and as much as she loves them all like her family she has found it lonely at times because not many men are willing to face up to so many men to date her. The ones that made the effort usually did it because they wanted something from her rather than because they had feelings for her.

Ryder is different though, as the leader of Sector Five he's powerful in his own right. He's an ally of the O'Kanes but he isn't looking to take over from Dallas, he wants to work with him to bring down the people in control of Eden. Ryder has been raised for war, he has been preparing for this moment practically from birth and he eats, sleeps and breathes fighting tactics and plots against Eden. One thing he never did was look beyond the war to what would happen to him next, he was so focused on the battle that he forgot about the happily ever after. Until Nessa came along that is. It's a terrible time to start a new relationship but actually it might be the best possible time too, after all you only fight harder if you've got someone special to come home to.

I loved everything about this book, the romance was both sweet and hot, the action was non stop and my heart was in my mouth for most of the story. Beyond Surrender is a fitting end to a series I've followed for years now but it was also a great introduction to some new characters that I'm looking forward to getting to know better in the future.