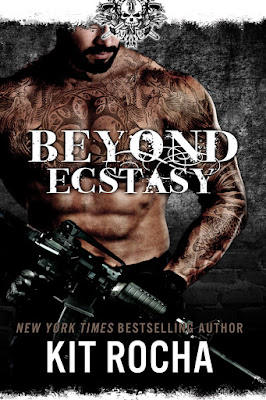 The O’Kanes have a reputation for working hard and playing harder—except for Hawk. He joined the gang with one goal: to ensure his family’s survival through the impending war with Eden. It’s been years since he had the luxury of wanting anything for himself. Now, he wants Jeni. From the first moment he saw her, he’s been obsessed with making her his. Not for a night—forever.

Jeni’s been lusting after the former smuggler for months, but he keeps shutting her down. She’s almost given up on getting him in her bed when he offers her the last thing she ever expected—a collar. Accepting it means belonging to him, body and soul. It’s a reckless gamble, but Jeni can’t resist the chance to slip under Hawk’s armor.

The only thing more shocking than the dark, dangerous pleasure they discover is how right it feels. But falling in love is even more reckless when forever is far from guaranteed. Because they aren’t just at war, they’re out of time—and every breath could be their last.

Review:
Beyond Ecstasy is the eighth (and second to last!) book in the Beyond series so this review may contain spoilers for the series arc of the previous seven stories. This is definitely a series you want to read in order because as much as each book features a different main couple there is an ongoing storyline about the animosity between the people in the sectors and the rulers of Eden. Things have been getting gradually worse and now we're coming to the end of the series the stakes are higher than ever. War isn't just looming on the horizon, it's now arrived and that puts everyone we love at risk.

It's been obvious for a while now that Hawk and Jeni both have a thing for each other but no matter how many hints Jeni has dropped Hawk has avoided taking her up on her advances. He's been studying her from a distance and he knows everything about her, enough to know that he wants to claim her as his own, he just forgot one tiny detail - letting Jeni get to know him in return! With war looming Hawk knows if he doesn't make his move now he'll regret it but when he offers her a collar Jeni is completely shocked, it's come completely out of nowhere for her and she's not sure if she's ready to take such a huge step with a man she barely knows.

I have to admit that I felt things were initially a little rushed between the two of them, they go from zero to sixty in no time at all and although we've seen them admiring each other from afar for several books now I didn't think they were ready to jump into such a serious relationship as fast as they did. Don't let that put you off though because I really enjoyed seeing them work out how to be a couple, they both made a lot of mistakes due to the fact that they jumped in so quickly and I was happy that they then had to take a step backwards and figure out where they went wrong. It made their relationship so much more realistic because they had to keep working at it even after they'd decided they wanted to be together. They came out the other side a much stronger couple because of the problems they had and I think they're pretty perfect for each other.

If you've ever read any of this series before then you'll know that the O'Kanes like to get down and dirty so Jeni and Hawk are no different, they touch on a little S&M (nothing too major - just spanking really) but more than anything they both get off on dominance and submission. In a lot of ways this was probably tamer than some of the other books in the series but there was still plenty of heat to it and I thought Jeni and Hawk had brilliant chemistry. Hawk was a very considerate lover and he took great care of Jeni so her safety was always a priority for him.

I enjoyed getting to meet more of Hawk's family, he's from sector six so his father had something like 10 wives and he has a huge number of siblings which was quite a scary thought. They seemed like a really close bunch though and we saw a completely different side of Hawk when he was around them. As always we got to spend plenty of time catching up with other O'Kane characters too, Jeni has quite a deep connection to several of the others and I loved the way they looked out for her and all wanted to help Hawk to understand what she needed.

War has been brewing between the sectors and Eden for a long time now but the danger has definitely ramped up in this book, the sense of fear in Sector Four is palpable but so is the sense of hope for the future. These are characters who know exactly what they want to achieve and they are prepared to do whatever it takes to meet that goal. They know they will be putting their lives at risk and that's something that weighs heavily, particularly on sector leaders Dallas and Lex, but they've been stockpiling medicines, food and weapons and they're as ready for what's coming as possible. The stakes have never been higher but they have no other option but to fight.

This series has just been so much fun to read and I can't wait to get my hands on the final book. I'm also incredibly relieved that Kit Rocha has announced the spin off series because I'm really not ready to say goodbye to this world yet! 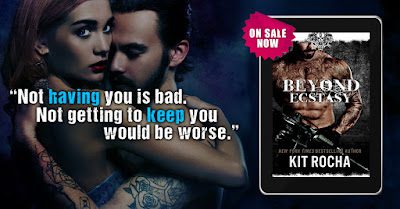 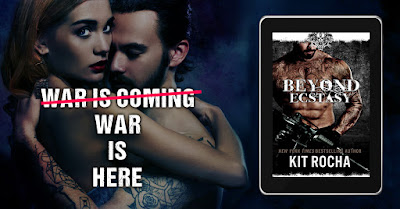