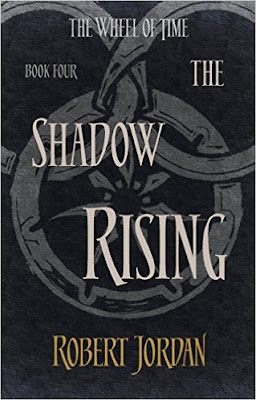 The Stone of Tear, invulnerable fortress of legend, has fallen. The Children of the Dragon have risen to the call of prophecy and march to the aid of the Light. Callandor, the Sword That Is Not a Sword, is held by Rand al'Thor, the man proclaimed as the Dragon Reborn.

But still the shadows lengthen and still the Forsaken grow in strength. If he is to fight them, Rand must master the male half of the True Source, a power corrupted by the Dark One, a power that drives men to madness, a power that may save or damn the world.

Review:
How am I even supposed to write a review for this book? I honestly have no idea where to start because there was just so much going on and all of it was fantastic! This is the longest instalment in the Wheel of Time series so far (coming in at just over 1000 pages) but I never once felt bored and that's a testament to how brilliant Robert Jordan's writing is. I am so totally pulled into this world and so invested in all of the characters (even the ones I don't always like that much!) that I never want to leave and I'm so happy that I still have 10 more books to look forward to.

I can't possibly talk about everything that happened in The Shadow Rising unless I want my review to be a small book in its own right so I'm just going to discuss some of my favourite characters or particular events that really stood out for me. Even narrowing it down that far is difficult though so you'll have to forgive me for any fangirling that occurs in the next couple of paragraphs. Perrin has always been my favourite of the Two Rivers boys and he shines brightly in this book. After finding out that his home has been invaded by the White Cloaks who are looking for himself and the others Perrin knows he has to go back and try to put things right. It's a dangerous journey but he has the ever loyal ogier Loial to protect his back, a few fierce Aeil willing to fight alongside him and the incredibly stubborn Faile acting as a thorn in his side. I absolutely loved everything about Perrin's storyline, it was fun seeing how differently the Two Rivers folk see him when he returns (he left a boy but he's definitely returned as a man!), I enjoyed the banter and romance between him and Faile, the friendship he has with Loial, the way he takes charge, brings the villagers together and teaches them to fight, everything. It was all perfect and I can't wait to see his confidence continue to grow.

Rand and Mat haven't abandoned Two Rivers without good reason and they have their own journey to face into the heart of the wastelands to try and win the support of the rest of the Aeil people. Their story was an interesting one and there were certain stand out moments but I'm not going to spoil it by going into details so you'll have to read it for yourself. I did love finding out more about the Aeil though, their culture is fascinating and we get to see more of it through Egwene and Moiraine's eyes as they travel with the boys. I hate to say it but when Egwene and Nynaeve are in the same room together 90% of the time they are getting on my nerves so I was incredibly relieved when they finally split up and went in different directions. Egwene has started training with the Aeil Wise Ones and I have to say I loved how they punished her when she went against their orders, I'm hoping that the time she has spent with them will have made her grow up a little and perhaps she'll be less irritating in the future.

Nynaeve and Elayne separate from the others to go off hunting Black Ajah on the orders of the Amyrlin and that probably places them in the greatest danger (alongside Perrin) for the moment. They have a few familiar allies though and I really enjoyed seeing them working together. They are much nicer to be around when Egwene isn't in the picture and although they have their work cut out for them there were also some very humorous moments when Elayne seriously underestimates the amount of alcohol she has consumed. Oh and watch out for the very heartfelt moment between Nynaeve and Lan - I need more of those please, lots more! Another thing I really enjoyed was getting to see a lot more of Min's point of view in this book, she has returned to the White Tower with a message for the Amyrlin and while I can't say more for fear of spoilers let's just leave it that things are getting VERY interesting with the Aes Sedai and nothing is quite what it seems at Tar Valon.

This was definitely the most interesting instalment in the series so far, now we're all so familiar with the world and the characters we're really able to enjoy all the different plot threads and we're starting to see how various things tie together in unexpected ways. Most of the characters have come a long way since we first met them but I'd like to see a bit more growth from Egwene and Mat in particular in the next book. I just can't wait to see what our heroes are going to have to face in The Fires of Heaven!