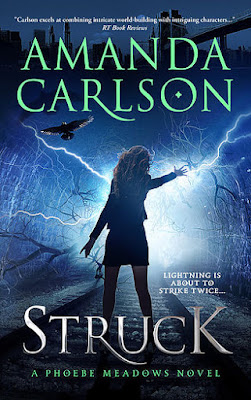 When Phoebe Meadows gets struck by a strange light in the stockroom of Macy’s, life as she knows it flies out the window. As if being hit by lightning isn’t bad enough, she’s accosted in the subway by a man with a missing hand, arrives home to find a raven on her kitchen counter, and her neighbor, Ingrid, shows up dressed like a gladiator hell-bent on protecting her.

Before Ingrid can shuttle her to safety, Phoebe is kidnapped and tossed into one of the Nine Worlds where she’s quickly forced to come to terms with what she is: A valkyrie. The only problem is, she has no idea what that means.

After a narrow escape, she finds an unlikely ally in Loki’s son, Fenrir. Together the valkyrie and the wolf must battle their way back to New York City and reach the valkyrie stronghold where Ingrid is waiting for her. But with danger and obstacles at every turn, she might not live long enough to learn the full truth about who and what she really is . . .

Review:
Phoebe thought she was just a normal girl trying to make ends meet in the big city until the day she gets struck by lightning in the stockroom of the Macy's store she works at. The next thing she knows her neighbour Ingrid is announcing that she's Phoebe's aunt and that Phoebe is the long lost child of a valkyrie and a god. Apparently her parents kept her a secret for a very good reason and now that Phoebe is starting to come into her powers she's become a beacon for the enemies that hunt her. After a botched kidnapping attempt leaves Phoebe trapped in one of the Nine Worlds she has no choice but to ally herself with the demigod Fenrir to try and find her way back to New York so that Ingrid can explain what the hell is happening to her.

I had so much fun reading this novel! Amanda Carlson has created a likeable and very normal heroine who is thrown into a world where creatures from Norse mythology are in fact very, very real. Poor Phoebe is completely out of her depth and she barely has a moment to catch her breath from the beginning to the end of this novel, she really is thrown in at the deep end and has to fight with every last scrap of strength she has just to survive. I loved that she wasn't perfect, she didn't always know how to react or what her best option was and she just had to do the best she could to muddle through but no matter what she went through she didn't give up and she did whatever she had to to hold her own in any fight. She was also fiercely loyal to the people she trusted, if you prove yourself to be her ally then she'll have your back no matter how bad the odds of survival.

Fen was another brilliant character, he's survived things that would have turned a lesser man insane but it's left him strong and with a highly evolved protective streak. He's not sure what to make of Phoebe at first but he admires her will to survive and I think he found her naivety endearing too. The pair have to work closely together if they're going to have any chance of escaping and I enjoyed seeing their relationship start to blossom as they got to know each other. I did find that the declarations of love came a little too quickly, up until that point their relationship had been progressing at a believable rate so it felt that things stepped up a gear just a bit too fast at the end, but I'd rather have things move fast than be stuck with another dreaded love triangle so I'm not going to complain too much. I think they fit really well together so I'm happy to see them as a couple and I think we're going to see things really develop further between them as the series continues.

There are a couple of great side characters in the god of war Tyr and Phoebe's human friend Sam and I'm also looking forward to getting to know more about the valkyries in future books. I don't know a huge amount about Norse mythology but I'm really enjoying what we've seen so far of the Nine Worlds and the various different creatures and gods that inhabit them. I'm sure there is a lot more to explore and I'm excited to find out what Phoebe will encounter next. Struck was a fabulous start to this series, it's very action packed and will suck you in from the first page giving you a wonderful new world to explore. I can't wait to revisit these characters again in the future and I have a feeling it's going to turn into a favourite series before too long.