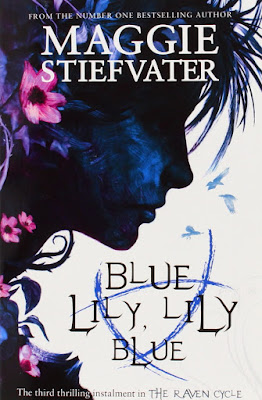 For the first time in her life, Blue Sargent has found a place where she feels at home. The Raven Boys have taken her in as one of their own and she is sure that this is where she belongs.

But certainties can unravel.

And friends can betray.

The trick with found things is how easily they can be lost . . .

Review:
After loving the first two books in this series I had very high hopes for Blue Lily, Lily Blue and I'm afraid it just didn't live up to them. There is no doubting that Maggie Stiefvater is a wonderful writer, she has a beautiful style and her stories are always captivating but this book just didn't grip me as much as the previous two. In fact, I'd have to say I was bored for the majority of it and it was one of those books that was very easy to put down even part way through a chapter and then I pretty much had to talk myself into picking it back up again. That's something I NEVER expected to be able to say about a book written by Maggie. I do seem to be in the minority on this one though, nearly all of my friends rated it 5 stars and I'm still really looking forward to seeing how everything ties together in The Raven King so don't let me put you off trying this for yourself if you enjoyed the first two books.

There were certainly some brilliant moments scattered into the story, I absolutely adored Gansey and Blue's relationship for one thing, they are just so incredibly sweet together and I love the sly little touches and looks they give each other when nobody is watching. I also really enjoy the friendship between Ronan and Adam. The women of Blue's family always steal every scene they appear in but I definitely found myself missing Maura in this instalment, she's always been Blue's anchor and now Blue is lost and adrift without her which was sad to see. The Gray Man is a character who continues to surprise me and I love the way he looks out for Blue and the others while Maura can't.

Unfortunately I think the story focused on too many new plot threads and lost track of some of the things I'm invested in, I wanted to see more of Noah, more Ronan (especially more of him with his brothers - I STILL don't get why he has such a problem with Declan!) and more of Adam too. Adam actually started making great progress in trying to figure out the balance between accepting help from friends versus feeling like he's a charity case and there was a brilliant scene between him and his father but it just kind of fizzed out and went nowhere. They went to the effort of bringing Gansey's mentor over from England but then he seemed to have absolutely nothing helpful to add to the story, really he could have achieved everything he did via telephone conversations and I didn't see the point of them dragging him around on the hunt for Glendower with them.

There were a lot of new characters, some of whom I didn't feel had much to add to the story and others who may have more important roles to play in book 4. I actually feel like a lot of the things that didn't make much sense or felt just like filler in this book will probably all become so much more clear when I pick up The Raven King, I trust that Maggie Stiefvater has a plan and I'm sure I'll end up being blown away by her clever plotting but at this point in time I feel really indifferent to Blue Lily, Lily Blue. It could have been a brilliant book but it was just okay and that's not what I expect from this author.