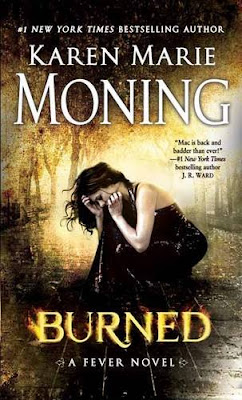 MacKayla Lane would do anything to save the home she loves. A gifted sidhe-seer, she's already fought and defeated the deadly Sinsar Dubh - an ancient book of terrible evil - yet its hold on her has never been stronger.

When the wall that protected humans from the seductive, insatiable Fae was destroyed, long-imprisoned immortals ravaged the planet. Now Dublin is a war zone, with factions battling for control and passions running red-hot. Seelie and Unseelie vie for power; a rival band of sidhe-seers invades the city; Mac's former protégé and best friend, Dani "Mega" O'Malley, is now her fierce enemy; and, even more urgent, Highland druid Christian MacKeltar has been captured and is being driven deeper into Unseelie madness. The only one Mac can depend on is the powerful, dangerous Jericho Barrons, but even their fiery bond is tested by betrayal. In an epic battle against dark forces, Mac must decide who she can trust, and what her survival is ultimately worth.

Review:
Warning, this review will contain spoilers for Burned. I've tried and tried to write a review without any but it's just impossible to talk about it properly without at least touching on some major events in the book. I'll try to keep it to a minimum but read on at your own risk.

I have such mixed feelings about this book and that's one of the main reasons it's taken me such a ridiculously long time to write this review. Going into Iced I had incredibly low expectations because so many people hated it but after surprising myself and enjoying it I was then expecting even bigger and better things from Burned. And in some ways it delivered them: I got answers to a lot of questions I had, Ryodan went a long way towards redeeming himself, I got to spend more time with Mac and Barrons and the issue of Dani's age was resolved.

All those things should instantly make it a favourite book but unfortunately the way these things happened also came with negatives. Ryodan went a little too far towards redemption and lost a lot of his roguish charm, I'm glad he was able to justify some of his actions in Iced but I don't want to suddenly see him as a perfect guy. The best thing about him was the fact that he was an unapologetic arse! Yes, we spent more time with Mac and Barrons but they're far from the couple we fell in love with in the first book - Mac is a shadow of herself (even worse than Mac 1.0!) and the closeness they'd built up to is pretty much gone. Barrons seems to have lost all respect for Mac and since Mac is acting like a child all of the other characters start to treat her like one. There is an interesting twist with Mac and the Sinsar Dubh though and she did start acting a little more like herself by the end of the book so I'm hoping she'll work out eventually.

Then you have Dani, I've always loved her character, as irritating as she could be she always felt like a realistic teenager. I wanted to see her grow up and become a woman but that's exactly the problem here. I wanted to see it. I wanted to watch the changes with my own two eyes not have her disappear into the Silvers and have her magically come back 6 years older and a completely different person! In some ways that plot device is genius and I actually kind of like the disconnect between Dani and Jada, it even explains a few things about her past and it added a whole new layer of complexity to her character, I just don't like the fact that the Dani I know and love has vanished. I guess all I can hope for now is that KMM will find a way to merge the two sides of her character into someone who is recognisable as Dani but an older, more experienced Dani who is more in charge of her own life.

This book is a perfect example of the phrase "Be careful what you wish for", it totally feels like KMM took on board what a lot of fans complained about after the release of Iced and wrote the Burned to appease them. That's all well and good in some ways but in others it feels like a bit of a cop out, like she gave up on her own plans for the series because fans complained too loudly about the way she had handled certain things. For those of us who actually enjoyed Iced it was an extra kick in the teeth because she took away all the things that made it great. I'm actually disappointed that the additional trilogy that was supposed to be Dani's story was taken away from her and given back to Mac and Barrons, especially since I feel like their story has already been told and they don't have a lot to add.

It's not all bad though and there were some things I really enjoyed about the story. I actually liked Jada as a character (I just wanted to see how Dani went from being the girl we knew to being a warrior like Jada) and I think she's going to have an interesting impact on the Sidhe Seers. I loved the scenes from Lor's point of view, he outshone both Ryodan and Barrons in this book I think so I hope we see a lot more of him in the next book. I already mentioned an interesting twist with the Sinsar Dubh but we also get to see more of the Unseelie King and the Concubine which was brilliant and I loved the addition of the Unseelie Princess.

So I didn't hate Burned but I didn't love it either and I just have this nagging feeling that it could have been so much better. Will KMM get things back on track in Feverborn? I honestly don't know. I kind of hope she does but I no longer have that desperate urge to read it and find out. Will I get to it at some point? I'm sure I will, in fact, finally sitting down and writing this review (nearly 5 months after I read the book!) is kind of making me want to pick it up now, but there's another wary part of me that thinks it's probably best to wait until the entire series is finished before going back there. Then I can read all the remaining books together and be done with it once and for all.