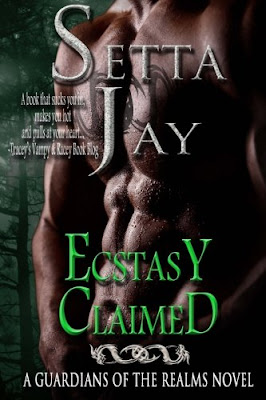 Gregoire has spent centuries with his brother Guardians fighting for the safety and security of the Realms. Endless decades of battling mixed with bouts of mindless sex to sate his needs. Needs that haven’t truly been fulfilled since she was born. The one destined to be his bonded mate. For the last twenty five years Gregoire has kept his distance giving her time to grow into a female who is capable of handling his intense dominance.

Alyssa has done everything that was expected of her, until the day she finds out she has a mate who has left her unclaimed. Unheard of when mates are rare and coveted. Even worse is the fact that he is the most powerful of her race and a Guardian of the Realms. Furious at the rejection she decides she is now in charge of her life. No more will she allow others to rule her.

Against the backdrop of evil forces that are conspiring to topple the Realms, can Gregoire find his wayward mate before she is taken by corrupt Immortals? Can Alyssa forgive him and learn to exert her own female power while surrendering to his savage passion? And will the two of them be able to forge a mate bond that cannot be severed... or will they be forever cursed with an Ecstasy Unclaimed?

Review:
After really enjoying Hidden Ecstasy and Ecstasy Unbound I was excited to read Gregoire's story and had high hopes for this book. Unfortunately I didn't love it as much as I expected to, this series is all about the sexy alpha heroes which is normally a huge bonus for me but there is a BIG difference between a sexy alpha guy and an alpha asshat and I'm afraid Gregoire swung too far into the second territory for me to ever fall for him. He has known Alyssa is his mate since he first saw her as a baby (he's friends with her father) which is I have to admit is not something that I'm a particular fan of but I can deal with it because he waits until she is 25 years old before making a move on her because he wants to allow her to mature as a woman without his influence in her life. I still felt the age gap between them was just too huge though, we see huge gaps in paranormal romance all the time but Alyssa is just very young, naive and innocent compared to Gregoire and I found it difficult to believe that they would ever be on the same page emotionally.

I was never completely sold on them as a couple and there were moments I really wanted to slap Gregoire. What is it with guys who are happy to sleep around with thousands of women while they wait for their mate to come along but if she has even looked at another guy before they met they'll threaten to murder him? Seriously, that's just asshat behaviour and it's NOT sexy. It's also not sexy when a guy starts badmouthing the women he's slept with in the past, so it's okay for him to sleep around but the women he went to bed with were just trashy? Look in the mirror Gregoire, look in the mirror. I think you'll find there is only one asshat in that equation and let me give you a hint, it isn't a woman!! Want to know something else that isn't sexy? When a guy is so ridiculously possessive that he gets jealous when his girl talks to other women or even pets the dog (or in this case Hellhound!). FFS what is wrong with him? Yes, I get it's the whole "mating bond" turning him crazy but I don't care - I DON'T LIKE IT.

As much as I didn't love the main couple I could have dealt with their "romance" a little better if it hadn't been for the side story going on between Sam and Eric. Both of those characters were introduced in the previous book so I don't consider it a spoiler to mention the way we watched Sam get raped and tortured by multiple guys before the others were able to rescue her. Now I have to admit I mentioned in my review of Ecstasy Unbound that I was incredibly nervous about how their relationship would be handled, especially since Eric's mating bond had been triggered when he met her but Sam is trying to deal with the aftermath of such a horrific experience. I was hoping that Setta Jay would be able to handle things with sensitivity but no, this book actually had some of the most rage inducing scenes I've EVER had the displeasure of reading.

This time it isn't the hero that annoyed me, in fact Eric was incredibly caring and protective towards Sam and he went to great lengths to ensure he didn't frighten her or cause her any more trauma. What made me want to throw my kindle across the room was the way his family and the other guardians spoke to her. Sam was freed less than a week ago and after everything she has been through she would still be recovering physically let alone mentally, those kinds of memories aren't going to be cured overnight for sure. Yet people are constantly putting pressure on her to complete the bond with Eric because the "mating frenzy" is causing him pain and distress. Let's just get facts straight, whatever Eric is going through is NOTHING compared to what Sam has already suffered and he has no interest in completing the bond with her while she's still emotionally fragile. So much so that they have to sneak up on him and chain him to the bed to get him to go through with it! But poor Sam has people nagging at her constantly until she gives in and agrees to sleep with him, then we're inside her head listening to how dirty she feels and watching her cry while she does it and I'm supposed to find that sexy? Honestly those scenes made me want to vomit and I've never suffered a sexual trauma but I dread to think what this would be like for anyone who has been through anything similar to Sam.

I could rant on for hours about how much I hated that scene and the fact the way Sam and Eric's relationship was handled, especially since they're both such nice characters. Their relationship had so much potential to be a wonderful thing and I feel cheated that the author rushed their storyline and tried to brush all of Sam's trauma under the carpet. If their relationship had developed slowly over several books (or even a full book of their own) I could honestly have totally fallen in love with this couple but all that happened is I ended up hating most of the other characters for the way they treated the pair of them. The way this was handled, coupled with Gregoire's asshat behaviour, has just ruined the series for me and I'm not sure I'll ever want to continue reading it. I normally reserve my 1 star ratings for books that are so bad I couldn't even finish reading them but this one made me rage so much that I can't even bring myself to even give it 2 stars. It's such an incredible disappointment for a series that has so much potential to be destroyed so utterly by such careless handling of a rape victim.