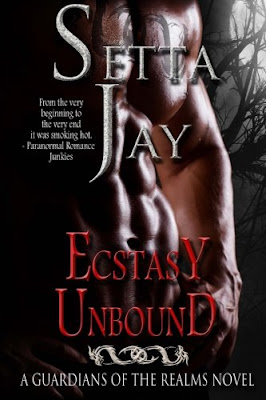 As one of the twelve Guardians, Urian has spent the last several centuries in a constant battle to keep the inhabitants of Earth’s Realms under control. Humanity has to evolve, hell beasts need to die, and Immortals need mates. But lately, Uri's mind is overrun with thoughts of when his sexy voyeur will find him again, watching him from the shadows, continuing their wicked game. All Guardians are forbidden contact with the little goddess and her brothers, but his need for her escalating, he finds it increasingly difficult to keep from pinning her down on the nearest surface and making her his.

Alexandra has managed to evade the Guardians and being cast out from the human Realm for centuries, ever since the Creators sent the Gods to sleep for their sins against humanity and banished all Immortals. Always sensing that she was needed on Earth, only once has Alex gone against her instincts and the price she paid will forever haunt her. It is for that reason she forces herself to stay away from the only male who has ever truly enticed her. The only one who has ever made her long for what she knows is dangerous.

In a desperate need to help her beloved brother, she will have to go to the enthralling Guardian, her dark obsession, and even though he will surely attempt to exile her, she won't go easily…

Review:
When the gods nearly destroyed humanity in their greed and madness the creators banished them from the human realm into Tetartos where they will sleep until they are needed once more as a punishment for their crimes. A band of twelve immortal warriors now guard the realms, they are in charge of keeping the gods out and protecting the humans from the demons that try to possess them. As demigods Alex and her brothers should have been banished with the rest of the gods but they have spent centuries hiding on earth and living peacefully amongst the mortals, they even help the guardians by fighting demons so they have a fragile truce between them. The demigods and guardians don't mix but the guardians won't try to banish them as long as they're helping and not causing trouble. Alex knows she should keep well away from Uriel, as a guardian he would be forced to send her to Tetartos if they ever get too close but she can't resist the attraction she feels for him and she has taken to spying on him in his most intimate moments. Uri knows he should walk away from Alex but she is a temptation unlike any other and one day he's not going to be able to resist.

As the first book in the Guardians of the Realms series Ecstasy Unbound has quite a lot of world building and I have to admit I found it a little confusing to keep track of at times. There are lots of different types of immortal guardians, who all have slightly different abilities and there are a lot of names to remember so I frequently found myself having to backtrack to make sure I had everything straight. This is a common problem with first books in a series though and I think it will get easier as we go on when everything starts to feel more familiar. Setta Jay has put her own spin on the greek mythology used here and I'm curious to see where things go with the sleeping gods in the future. This is an erotic series so there is a lot of sex, right from the very beginning, but you'll get no complaints from me on that score because it's undoubtedly hot!

Alex and Uriel have been fantasising about each other for centuries, they play a game where Alex spies on him when he is with other women but they've never come into close contact or acted on the attraction that they feel. Everything changes when Alex's brother is in trouble, Uri is the only person she can think of who might be able to help her and she will risk anything to help Eric. When they finally come into contact for the first time the chemistry between them roars to life, in fact, it's much more than mere lust between them as they discover they are mates. Not only are they trying to deal with their newly found mating bond but Uri has to try and convince the rest of the Guardians that Alex and her brothers shouldn't be banished to Tetartos and that they should instead work together to help Eric and rescue a woman who has been kidnapped by their enemy.

There is a lot going on in this story and more than enough action to keep me interested. I also really enjoyed seeing Alex and Uri deal with their new bond and an emotional connection that neither of them were expecting, physically they have no problems with their new situation but it's going to take some getting used to their new mental connection and having the freedom to actually be together. I did feel that the mating bond was a little overdone, it just sent them a little too crazy (especially Uri) and I think it could have been dialed back a little. The mating ceremony was undoubtedly hot but it just seemed a little out of character that the two of them had only recently had a conversation about being an exclusive couple and Uri had told her how possessive he was but then he was willing to invite a third party to join in the official ceremony joining them together. I would expect a moment like that to be something more private between the two of them and I'd have rather had the threesome at a different point in the story but that's down to personal taste I guess and it didn't stop my enjoyment of the rest of the book.

There were two other things that did bother me though, one was the rather explicit rape scene and the way we got so much detail of the torture that poor Sam and the other captive women were put through. I think a fade to black at certain points would have been much more appropriate - I'm happy to read sex scenes but I have NO interest in rape ones. The other thing that bothered me is a slight spoiler so I'm not going to go into detail but it was to do with the way everyone was pressuring Sam to help Eric so quickly after she had been rescued. I guess I'll have to see how that plays out in future instalments to see whether it resolves to my satisfaction but I felt extremely uncomfortable about the way things were being handled and felt that the added stress was the last thing Sam needed after everything she had been through.

Ecstasy Unbound wasn't perfect but it was a good start to the series and I am keen to find out where things go from here. I liked the banter between the Guardians and there are already a few characters I think I'm going to really love when we get to their stories.