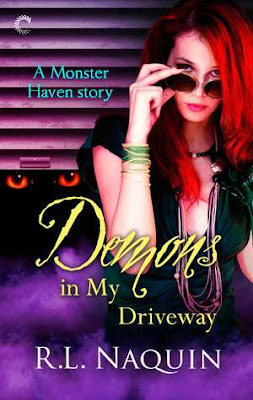 Zoey Donovan Aegis and co-opted protector of all things supernatural is moving up in the Hidden world. Actually, she's being drop kicked onto the front lines of a fight between the newly formed Cult of Imagination and Hidden governments everywhere.

The Cult is opening portals and unleashing demons, vampires and werewolves, growing closer to breaking the lock that holds back the zombie apocalypse with every world they crack open. Oh, and they want every last Aegis in the world dead, and a roving band of Hidden worshippers is only too eager to assist.

On the upside, Zoey finally has her mother back. But having another Aegis around one with very different ideas on how to run things is proving difficult. For their own safety, they're stuck inside Zoey's home. What was once a haven is now a prison, further straining maternal relations and alienating her reaper boyfriend. Taking down a cult and saving the world again would be a lot easier if she could go farther than her own driveway.

Review:
When I'm looking for a fun, light hearted read with a huge collection of weird and wonderful supernatural creatures this is my go to series, R.L. Naquin never fails to make me laugh and Demons in My Driveway was no exception to that. I have to admit that this story was a little darker in tone and had a few less humorous moments than the previous books but I'm still an avid fan and looking forward to seeing how Zoey's story ends in Phoenix in My Fortune. Actually, I'm not sure that I'm ready for the series to end but that's always the sign of a great series - leave your readers wanting more not wishing it had ended 5 books ago!

A lot of things have changed for Zoey, for one she has her mother back which she is over the moon about even if it is a little awkward having two Aegis in one house. Zoey and her mother both have very different ways of doing things and that leads to a lot of friction between them. They are now the only two remaining Aegis in the country so when Zoey is given the chance to go to an Aegis conference in the UK she jumps at the chance of meeting others like herself. Unfortunately things don't go quite to plan and now she finds herself in a desperate race to save the last remaining Aegis before their enemy can kill them all and destroy the planet in the process.

Yes, once more Zoey is in the middle of the action and she is going to need the help of all her friends and allies if she is going to save the day. I'm not going to say much more about the plot other than to mention that we meet some interesting new characters. I was a little surprised (and very disappointed!) by the way Zoey and Riley have let the stress of their jobs come between them and put a halt on their relationship and I really hope they get things sorted out before the series comes to a close. I'm also curious to see how the Board will cope with having such a massive shortage of Aegis. Considering how much work Zoey already has to deal with they really are going to have to figure something out quickly unless they want the general public to discover the existence of the Hidden. It'll definitely be interesting to see how the series closes out but I'm kind of hoping that things will be left open enough to allow us to revisit these characters in the future or to at least have a spin off series. Anyone else interested in a series about a Closet Monster? I know I would be!