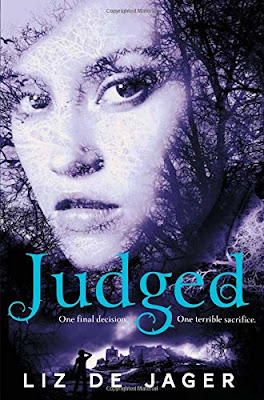 Glow, a fae-created drug, is rapidly going viral and the suppliers have to be shut down. Teaming up with Aiden and Dante, Kit follows leads across London, tracking down dealers. They stir up trouble, making themselves a target for the gang they're trying to stop.

In the Otherwhere, Thorn stumbles across a secret that could destroy both the human and Fae worlds. The Veil that separates our human world from the fae realms is weakening and the goddess is dying. And if she dies and the Veil fails, madness and chaos will wreak unstoppable havoc upon both lands.

Thorn turns to the only person he knows who'll be able to help him: Kit. Torn between working the Glow case and her loyalty for the young prince, Kit is propelled headlong into a world of danger. She faces enemies from both the Otherwhere and our world. And as the stakes are raised, the consequence of failure for both Kit and Thorn, and two realms, could be devastating.

Review:
Kit and her friends made it back from the Otherwhere but they had to leave Thorn behind in their escape. They're now back on the hunt for the supplier of fae drug Glow, trying to figure out why they have increased production and why they're willing to give the drug away for free. As if that wasn't bad enough they've now discovered that Glow's formula has been changed enough for it to affect other fae who come into contact with it. The drug is doing more damage every day and as people start to die from the side effects Kit and her friends become more desperate to stop the dealers. Thorn has his own problems to deal with, the veil that separates the Otherwhere from the human realm is starting to fail and if it comes down completely it could cause the destruction of both worlds.

I've been a huge fan of the Blackheart Legacy ever since I picked up the first book so I've been eagerly awaiting this final instalment for over a year now. Judged is everything I hoped it would be and Liz de Jager has given Kit and her friends a brilliant ending to their story. It's so hard to write this review because I want to talk about all the things that happen but I don't want to give anything away or offer any spoilers so I'm going to keep this deliberately quite vague.

What I've loved most about this series has been the progression we've seen in the characters. Kit started the series completely unaware of her family background or her heritage but she's come a long way in the time we've known her. She still has a lot to learn but she has been getting stronger every day and is more than capable of standing up for herself and the people she cares for. Another thing I love about these books is that Kit is able to be friends with more than one guy without there being any kind of hint at a love triangle! That's pretty rare in YA lately and all the more refreshing because of it. I've loved Kit's friendship with Aiden and Dante, the banter between all three of them has been fantastic and they obviously have a lot of affection for each other. I missed seeing as much of Kit's family here but everyone has their own tasks that they need to perform and it makes sense that they're all focusing on their own role.

The romance between Kit and Thorn has been sweet to watch but I liked the way they focused on their duty first and their relationship second. Judged is full of action from start to finish and does a great job of tying up all the loose ends from the previous books. As much as I'd love to revisit these characters again in the future I'm happy with how things ended here. Either way I'm looking forward to reading whatever Liz de Jager comes up with next.