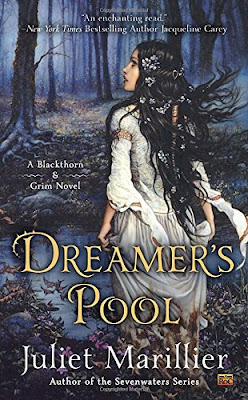 In exchange for help escaping her long and wrongful imprisonment, embittered magical healer Blackthorn has vowed to set aside her bid for vengeance against the man who destroyed all that she once held dear. Followed by a former prison mate, a silent hulk of a man named Grim, she travels north to Dalriada. There she’ll live on the fringe of a mysterious forest, duty bound for seven years to assist anyone who asks for her help.

Oran, crown prince of Dalriada, has waited anxiously for the arrival of his future bride, Lady Flidais. He knows her only from a portrait and sweetly poetic correspondence that have convinced him Flidais is his destined true love. But Oran discovers letters can lie. For although his intended exactly resembles her portrait, her brutality upon arrival proves she is nothing like the sensitive woman of the letters.

With the strategic marriage imminent, Oran sees no way out of his dilemma. Word has spread that Blackthorn possesses a remarkable gift for solving knotty problems, so the prince asks her for help. To save Oran from his treacherous nuptials, Blackthorn and Grim will need all their resources: courage, ingenuity, leaps of deduction, and more than a little magic.

Review:
Blackthorn was born to be a healer but treachery, betrayal and a year spent in prison for a crime she didn't commit have changed her. Now she's a bitter and angry young woman whose only focus is on revenge against those who wronged her. Just as she thinks she's about to get her chance to tell her side of the story the rug is pulled out from underneath her when she discovers a plot to murder her before her she can publicly prove her innocence. When she is approached by fae stranger Conmael, he offers her a deal, life and freedom in exchange for seven years of service to anyone who asks for her assistance. She will be forbidden from seeking revenge for the duration of the bargain and if she refuses a single request her punishment will be severe. Blackthorn knows that making a deal with the fae can be fatal but she already has death hanging over her head so she makes the decision to live now so she can eventually make her tormentors pay for what they did to her. After a daring prison break Blackthorn and fellow prisoner Grimm set out to find a new home and soon find themselves at the centre of a mystery surrounding a prince and his fiancée.

For a long time now I've been hearing amazing things about Juliet Marillier but this is actually the first book of hers I've read. I went in with high expectations and I wasn't at all disappointed, Dreamer's Pool has a dark and twisted fairy tale feel to it and although I'd managed to guess one of the main plot twists there were plenty of surprises along the way and I really enjoyed getting to know these characters. Blackthorn is brilliant, for someone who is incredibly wise and who has natural healing abilities she really doesn't have much in the way of people skills. She's been so hurt by past losses and betrayals that she doesn't want to let anyone close again, she deliberately pushes people away and tries to keep her distance but no matter how much she wants to keep a barrier up around herself people are naturally drawn to her and they respect her because of the sound advice she gives them. I could completely understand why Blackthorn was so set on revenge (and I really hope we get to see her mete out her own kind of justice eventually!) but I actually really enjoyed seeing her start to settle into her new home and put down a few roots. She'd deny any affection for her new village vehemently but we can all see she's starting to soften towards the people she meets.

Grim is another great character, he's as messed up as Blackthorn just in different ways. He's a big tough guy, someone who is incredibly powerful physically and who has a quick temper on him when people cross him or especially Blackthorn but at the same time he has a kind of sweetness to him and he's quite a big softie when you get to know him properly. I really enjoyed watching the bond that slowly starts growing between them, Blackthorn is determined to keep Grim at a distance but he worms his way into her heart anyway and they make a great team. There isn't much in the way of romance between them but I have high hopes that we'll see some in later books.

The story is told from three different points of view and Blackthorn, Grim and prince Oran are all narrators. Prince Oran has always dreamed of marrying for love but his family have been putting pressure on him to wed and start a family. When they arrange a match for him with Lady Flidais he only agrees to proceed after weeks spent exchanging letters convince him that they have a chance at falling in love. Unfortunately for him the young lady that arrives for the wedding is nothing like the one he was writing to, she seems to have undergone a complete change of personality and he has no idea why so he turns to Blackthorn for assistance. I liked Oran, he's very honourable compared to the other nobles and he bucks tradition in a good way. He cares a lot for the people he is responsible for and goes out of his way to make sure life is better for those who live in his home and the local villages. I'm not going to talk too much about what happened between him and Flidais but I enjoyed watching Oran and Blackthorn trying to get to the bottom of things.

Dreamer's Pool was a great start to the series and has definitely left me excited to start the next book. The series was darker than I expected but I mean that in the best possible way and I loved the whole fairy tale feel to it. I'm very curious to find out what Conmael's ultimate plan for Blackthorn is and I'm looking forward to spending more time in this world. This may be my first Juliet Marillier book but it certainly won't be my last and I'm looking forward to making my way through her back list as soon as possible.