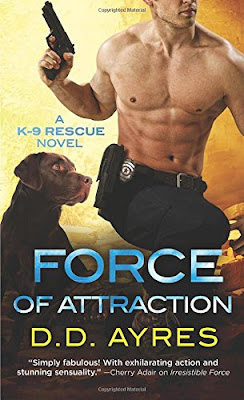 The only thing more powerful than fear is desire . . .

A seasoned K-9 officer with the police in Maryland, Cole Jamison has left her old life behind her. With a new home and a new partner-a protective canine named Hugo-Cole is ready for fresh challenges. A crucial position on an important drug task force is exactly what she wants . . . until she discovers her gorgeous, infuriating ex-husband will be the DEA agent in charge.

Agent Scott Lucca may be a pro when it comes to undercover assignments, but this job is daunting even for him. Posing as a happy couple on the dog competition circuit means he and Cole need to get a lot closer than they've been in years. Playing a live-in couple should seem like a walk in the park compared to tracking a brutal criminal, but suddenly nothing could be more dangerous than the passionate fire they've rekindled . . .

Review:
After getting her heart broken by her undercover ex-husband Nicole left her old life behind her and she hasn't looked back. Now she puts all her focus into her own career and she loves working as a K9 officer with her dog Hugo. Unfortunately for Cole her latest assignment puts her in close contact with Scott and no matter how much she hates him for what he did to her she can't deny the attraction they still feel. Scott always regretted the way things ended between him and Nicole, he was so deep into his undercover assignment that he let their relationship break down and he wishes he could go back and do things differently. Now that he has a second chance to show Nicole how much he has changed he is determined to prove to her just how good they'll be together.

I always enjoy second chance romances and Force of Attraction was a great one. Nicole has changed a lot from the woman Scott was married to, she is much more independant and in control and the last thing she wants is to let Scott back and end up with her heart broken all over again. Scott is also different though, it took losing the woman he loved to make him understand just how much he had let her down and all he really wants is to win back her trust. The sparks start flying immediately but it takes a long time for Scott to break down Nicole's barriers and he really had to work hard to prove himself to her. I was really pleased that Nicole didn't give into him too easily, he had hurt her badly and it wouldn't have felt realistic if she'd just let him straight back into her life without pushing him.

One of the things I love most about this series is the dogs and they add plenty of humour in this book too. To investigate their case for the DEA Nicole goes undercover at dog shows with her K9 partner Hugo and Scott is posing as her supportive husband along with his dog Izzy. The two dogs cause plenty of mischief along the way but D.D. Ayres does a fantastic job of showing the working relationship between K9 handlers and their partners. These police teams do such amazing jobs and each book in the series so far has shown them in very different circumstances. The mystery and danger from the case they are working was well drawn out and kept me guessing until right near the end, the romance was hot and spicy and the characters were great. Force of Attraction is another winner and I'm looking forward to continuing the series.