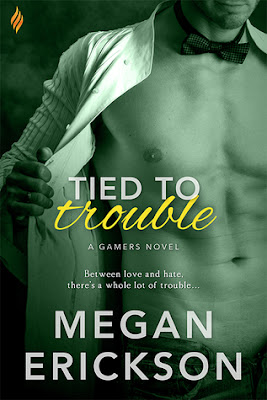 Between love and hate, there's a whole lot of trouble . . .

Chad Lake only showed up at his sister's party for the free food, but when he spots an uptight nerd at the edge of the crowd, he can't resist trying to ruffle the guy's perfect bow tie and impeccable hair. The hottie's ready for him, though, and in the end, it's Chad who's left wide-eyed, his ears still ringing with the filthy things Bow Tie whispered in his ear. No one gets the upper hand on Chad. Ever.

Owen Hawkins has heard all about the cocky Adonis from Chad's sister—the same sister who holds Owen's career advancement in her hands. He has every intention of steering clear of the other man . . . until Chad's sexy taunts push him too far. There's something intriguing about Chad, and even though Owen knows that getting tangled up with the infuriating man is trouble, he can't seem to stay away . . .

Review:
I've been hoping we'd get to read Chad's story since we met him in Changing His Game so I was really excited when I found out about Tied to Trouble. The previous two books in the series were M/F romance but I'm really pleased that more and more authors are mixing their series up a bit and including M/M stories in them too. If you've read any of the previous books you'll already know that the Gamers series is full of geeky main characters who are more than a little kinky and that's no different here.

Chad is Marley's younger brother and he's always drifted through life moving from one job to another whenever the mood strikes him. He doesn't seem to take much seriously and he has a reputation as a bit of a player. Deep down he does have ambition though, he's just scared to take a chance in case he fails. I have to admit there were times when Chad irritated me, he can come across as a petulant child sometimes and that wasn't something I'd expected after him being such a fun character in the previous books. Owen totally stole the show here, he works alongside Marley at Gamers magazine and is a shy nerd who has a tendency to fade into the background in spite of his colourful bowties. Owen wants to be taken more seriously at work but he lacks confidence and struggles to step forward into the limelight. These two come close to hate at first sight but no matter how much they irritate each other there is no denying the attraction they feel.

Chad has a way of bringing out Owen's adventurous side, for once Owen finds himself saying and doing the things he's always wanted to but never quite been brave enough to. You know how they say it's always the quiet ones? Well that's definitely the case with Owen and he is the king of dirty talking. Chad doesn't do so badly on that front either so if you like the dirty talk there is a lot to love about this book. This couple have fantastic chemistry which they act on at any and every opportunity but we do see a sweeter side to their romance eventually, especially in the epilogue which I thought was adorable. We also get a nice opportunity to catch up with Marley and Austin (the main couple from book 1, Changing His Game), Austin has big plans and he's recruited Chad and Owen to help him which I thought was a nice little extra for fans of the previous books.

I'm hoping we're going to get more books in this series but I'm definitely a fan of Megan Erickson's writing and will be buying anything new she releases in the future.