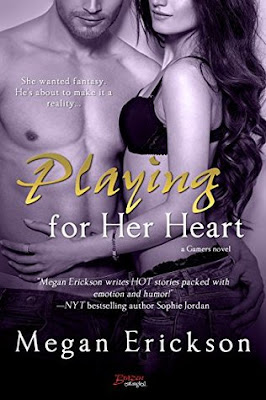 She wanted fantasy. He's about to make it a reality . . .

Grant Osprey just had the hottest sex of his life. Sure, they were both in costume, and yes, it was anonymous, but he never expected her to bolt in the middle of the night without so much as a good bye, let alone exchanging numbers. Or names. All he's left with are her panties and some seriously X-rated memories . . . until he meets his business partner's little sister.

Only Chloe Talley isn't the bold, sexy vixen he remembers. And she wants nothing to do with him.

Cosplay is Chloe's only chance to leave her boring, socially awkward world behind. To forget that she's failing at life and can't be with anyone, let alone a single-father like Grant. But the raw hunger between them is undeniable. With him, she can be a misbehaving maid. A sexy call girl for hire. Each scene pushes Chloe beyond her strict boundaries, until Grant demands the one character she can't play.

Review:
I absolutely loved Playing for Her Heart, if you're fed up with controlling alpha billionaires and fancy falling for a nerdy hero instead you can't go wrong with Megan Erickson's Gamer series. After really enjoying Changing His Game I was excited when I was offered a review copy of the sequel but I have to admit I wasn't sure if the author would be able to top Austin who is one of my all time favourite nerdy heroes. I'm very happy to say that she managed it and Grant has now sailed into the number one spot.

Chloe is the kind of heroine you can imagine being best friends with, she's incredibly smart, talented and funny but she's also really shy and incredibly awkward in social situations. She doesn't really date and the only time she's really comfortable outside of her home is when she's playing a role which one of the reasons she loves cosplay so much. Dressing as a character gives her a confidence she never normally feels and when she meets Grant at Comic-Con sparks fly between them immediately. Neither of them are looking for a relationship but they're more than happy to indulge in a one night stand and it leads them to some of the hottest sex of their lives.

Grant is a single dad who doesn't have much time for dating, he's happy raising his daughter and settles for the odd fling when she's staying out with friends but his night with Chloe leaves him wanting more. Unfortunately she never even told him her name but that doesn't end up being an issue when he discovers she's his best friend's little sister. Pursuing her may break all kinds of rules of friendship but there is no way he's even going to try resisting temptation.

Chloe and Grant have fantastic chemistry and I think this book was even hotter than the first one, they're both into role play which helps keep things fresh but their connection isn't all about sex and there was definitely a sweet emotional connection between them too. I enjoyed the interactions with Grant's daughter Sydney and it was great seeing Grant break down Chloe's barriers and help her deal with some issues from her past. She was much more skittish about a relationship than he was but he knew she was worth the effort and was willing to fight for her.

I really hope the next book will be about Chloe's brother Ethan, his back story was quite heart breaking and I'd love to see him overcome his demons, but whoever the main characters are any future books in this series will be going straight to the top of my wish list. I love the humour and geeky feel to these books and it doesn't hurt that the sexy times are scorching. Megan Erickson is definitely an author I'm going to be watching out for in the future.