Review: An Ember in the Ashes - Sabaa Tahir 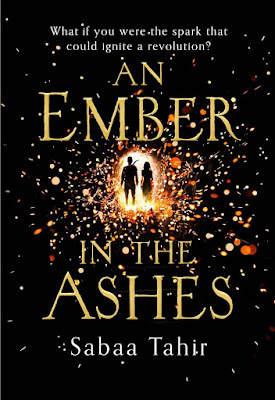 What if you were the spark that could ignite a revolution?

For years Laia has lived in fear. Fear of the Empire, fear of the Martials, fear of truly living at all. Born as a Scholar, she’s never had much of a choice.

For Elias it’s the opposite. He has seen too much on his path to becoming a Mask, one of the Empire’s elite soldiers. With the Masks’ help the Empire has conquered a continent and enslaved thousands, all in the name of power.

When Laia’s brother is taken she must force herself to help the Resistance, the only people who have a chance of saving him. She must spy on the Commandant, ruthless overseer of Blackcliff Academy. Blackcliff is the training ground for Masks and the very place that Elias is planning to escape. If he succeeds, he will be named deserter. If found, the punishment will be death.

But once Laia and Elias meet, they will find that their destinies are intertwined and that their choices will change the fate of the Empire itself.

In the ashes of a broken world one person can make a difference. One voice in the dark can be heard. The price of freedom is always high and this time that price might demand everything, even life itself.

Review:
Laia has spent her life living in fear of the Martials, they are the upper class in the Empire and have complete control over the the Scholars, including Laia's family, and they rule by force. When her brother is captured and her grandparents are murdered Laia is on her own and the only way to survive is to align herself with the resistance. They want her to infiltrate Blackcliff Academy, the exclusive school where they train the Masks, elite members of the Martial's army. If Laia is caught it would mean certain death but she has no one else to turn to. Elias is a student at Blackcliff, he has spent years training to become a Mask but he hates it and has made plans to escape. If he is caught the punishment for desertion is death but it's a risk he is willing to take in the hope of freedom. When the two meet their lives are forever changed.

An Ember in the Ashes is a book with a huge amount of hype behind it and while for the most part I enjoyed it and I will pick up the sequel I don't think it was as fantastic as it could have been. I had issues with both of the main characters which probably didn't help matters and I don't think the world was fleshed out as well as it could have been. Laia starts the story as a very weak and mousy character, it's understandable considering the way she has always been treated but she was incredibly spineless for the majority of the book. We do see a change in her by the end but I really would have liked her character to develop faster and think she probably would have considering what was going on around her.

Elias was okay but he was pretty bland and there isn't much to separate him out from a million other YA heroes we've already met. He seemed to turn into a bit of a lovestruck idiot any time he was around someone of the opposite sex, even with his female best friend Helene who he supposedly never had feelings beyond friendship for he mentally commented on her gorgeous figure every time he saw her. It didn't take long for me to get bored of the way he'd be in the middle of a battle for his life and suddenly his thoughts were distracted by "ooh look, I see blonde hair, I wonder if that's Laia in the distance". I think if he'd been in any real danger he would have died quite early on. Don't even get me started on the romances, it seemed like everyone had two or three potential love interests and I'm not quite sure if we ended up with a triangle, square or more likely a giant dodecahedron. Quite honestly it was hard to keep up!

There was something about the story that hooked me in though, I found it a really quick and easy read and things definitely improved towards the end once we'd been introduced to the world and the characters. I think that the problems I had could have been partly down to first book in a series syndrome and I am curious enough to want to know what happens next. I'll warn you now that it ends on a killer cliffhanger though, we are left with a million unanswered questions and very little resolution so you might be better off waiting until nearer the release date for the sequel before you give this a try.