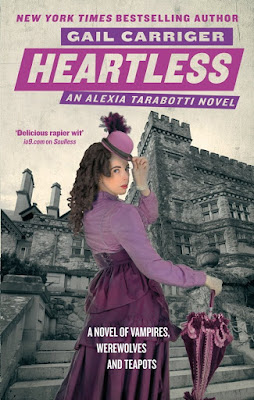 Lady Alexia, soulless, is at it again - only this time the trouble in the air is not her fault.

When a mad ghost threatens the queen, Alexia is on the case, following a trail that leads her deep into her husband's past. Top that off with a sister who has joined the suffragette movement (shocking!), Madame Lefoux's latest mechanical invention and a plague of zombie porcupines - and Alexia barely has time to remember she just happens to be eight months pregnant.

Will she be able to figure out who is trying to kill Queen Victoria before it's too late? Is it the vampires again or is there a traitor lurking about in wolf's clothing? And do they really have to take up residence in Lord Akeldama's second best closet?

Review:
I absolutely love the humour in Gail Carriger's Parasol Protectorate series but I have to admit I found myself disappointed with the turn this series has taken. It started going downhill for me in Blameless thanks to Conall's absolute refusal to believe his wife hadn't cheated on him, considering Alexia's preternatural abilities he should have been more willing to accept that he was the father of her baby but instead he spent most of the book in a drunken stupor believing she had been unfaithful. I felt that Alexia accepted his rather lacklustre apology far too easily so I was really hoping that she would make him work a bit in Heartless.

I'm actually pleased that they've got their relationship back on track, in spite of a lack of much needed grovelling, but there were a whole bunch of new issues that annoyed me in this book. Alexia is now 8 months pregnant but instead of resting up like she's supposed to she is too busy fighting off zombie porcupines sent by the vampires to kill her. It seems that the vampires have put a target on her head because they are worried about what her child might become and now she's even more at risk than ever before. I'm going to keep this review fairly vague to avoid spoilers but I was really shocked with the solution they found to this dilemma, I just couldn't believe that either of them would consider it an acceptable option - especially a protective, possessive alpha male like Conall. I love Lord Akeldama's character and always find him amusing but I am not at all impressed with his new role in Alexia's life.

As if vampire assassination plots aren't enough for Alexia to contend with she has also uncovered a plot against the queen and while trying to uncover what is going on she finds herself digging deeper into Conall's past. I enjoyed this side to the story, there were some interesting revelations about the Woolsey pack and I was pleased to see the banter back on track between the main couple but I've reached the point where I'm bored of Alexia's nasty younger sister Felicity and I was really shocked by what happened with the Westminster Hive. Once again they seemed to get one over on Alexia and Conall, it seems like the werewolves are constantly losing out to the vampires and that doesn't really give me much confidence in Conall's alpha status. He just seems to have gone from being the one who everyone is afraid of to someone that the entire supernatural community can walk all over and that's incredibly disappointing to me.

I'm still interested to see how things play out in Timeless but unfortunately I'm no longer as excited over this series as I was through the first couple of books. Let's just hope the series ends on a high note.